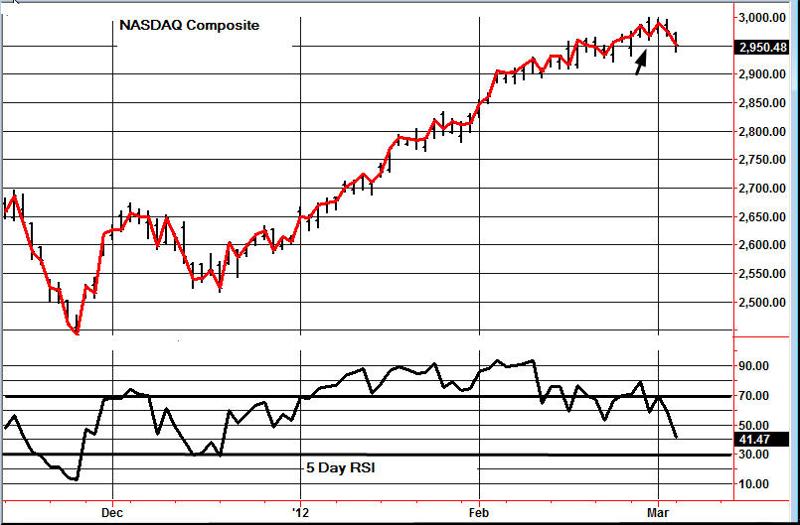 A projected attenuation of Chinese growth and renewed concerns about Greece caused a Dow drop of as much as 90 points in the early going, but about 2 hours into the trading day, the market began to come back.

This has been the pattern for the past few months. It has been a winning trade to buy into intraday weakness. One of these days that trade isn’t going to work anymore.

Today the NASDAQ Composite closed below a previous low (arrow) for the first time since mid December. The same is true for the S&P 500. For this reason, we will move to a short term sell. If this index decides to turn and move to another high, then we will have to move back to a buy. TORONTO EXCHANGE:  Toronto got whacked pretty good, down 119 points.
GOLD: Gold was down 15 intraday, but manage to claw its way back. It was still down for the session.
BONDS: Bonds were down marginally.
THE REST: The dollar was down just a bit. Not much influence on gold, copper and silver which were lower and crude oil, which was higher.

BOTTOM LINE:
Our intermediate term systems are on a buy signal.
System 2 traders are in cash. Stay there on Tuesday.
System 7 traders sold the SPY at 136.86 for a loss of .07, essentially break even. Stay in cash on Tuesday.

We’re on a sell for the dollar and a buy for the euro as of January 18.

We’re on a buy for copper as of December 20

We’re on a buy for the Toronto Stock Exchange TSX

#1 Timer of the Year

To subscribe to the Todd Market Forecast go HERE