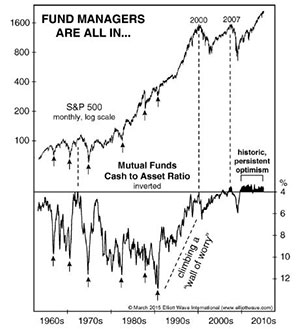 My answer: Absolutely not! No way has gold bottomed.

Yes, it’s trying to rally again. But the bounce came as no surprise to me, or to my premium members, who, just last week, I warned another bounce was coming.

But that’s all it is, the recent action is nothing but a bounce. Gold hasn’t even been able to get back above resistance at the $1,221 level.

Consider this monthly chart of gold. As you can clearly see, gold not only remains under pressure, but the sideways trading affair of the last year or so — with gold gyrating between roughly $1,300 and $1,140 — is merely eating up time, yet giving gold enough of a coil of energy to scare the dickens out of long positions on the next move down Moreover, there is no major support until the $900 level, which is where I expect gold to bottom.

But the key point is this: Even if gold rallies as high as $1,300, it would merely be a trap. One that would set the stage for loads of naïve investors and analysts to get their heads and wallets and pocketbooks handed to them.

Personally, I doubt gold can even get as high as $1,240. Instead, I wouldn’t be surprised if gold starts to rollover soon and begin its ultimate descent to new lows.

Why do I say that? Three reasons:

1. Gold’s recent rally already appears to be fizzling out.

2. The dollar’s recent pullback appears to also be ending. If so, and the dollar starts rallying again, then that would put immediate short-term pressure back on gold.

3. And perhaps most importantly are my timing models. I’ve made it nice and big for you below so you can clearly see what it’s projecting. There are a few important observations I want to call out.

First, looking at the green line, notice how accurate the timing model has been catching the swings in the gold market.

Mind you, this model does not back fit the results, then project forward. It analyzes over two billion sine waves in the price data of gold and then creates the projection line with a statistical probability of better than 90 percent. Second, notice the last low, on March 10, 2015. It too came right on time, and it also helped me get my premium Gold and Silver Trader members into bullish ETFs that helped spin off a 34 percent gain for the month of March!

Third, notice the timing sell signal for April 14, just six days from today. So yes, gold can rally, or at worst, hold its own for about another week, but then, the projected price path for gold points down HARD.

Fourth, notice the first opportunity for the next low, which should be a major low. That timing window comes on May 21.

Fifth, after a short-lived rally, gold should then move back down into a final low on June 24 of this year, which is the main target for a major low this year.

If it doesn’t fall to the $900 level by June 24, then we have one more timing window this year for a major low, in October (not shown).

The bottom line, however, is this: Gold, I repeat, has not bottomed yet. Nor have silver, platinum or palladium, or most commodities, including oil for that matter.

Therefore, please be extra cautious right now and do not fall into the trap that is being set by gold’s price action and by the analysts and newsletter promoters who want nothing more than to tell you gold has bottomed. It hasn’t and if you buy into their nonsense, you will be sorry.

Same goes for mining shares. They have not yet bottomed either!

Instead, stay out of precious metals and mining shares completely, until I give you the all clear sign. If you have metal or mining shares you cannot or do not want to sell, for whatever reason, consider hedging them with inverse ETFs.