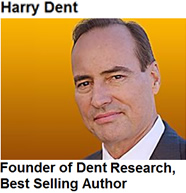 FRA Co-founder, Gordon T. Long is joined by Harry Dent to have a detailed discussion about the state of the global economy and how investors can be prepare themselves for the turmoils to come. Harry S. Dent, Jr. is the Founder of Dent Research, an economic forecasting firm specializing in demographic trends. His mission is “Helping People Understand Change”. Using exciting new research developed from years of hands-on business experience, Mr. Dent offers unprecedented and refreshingly understandable tools for seeing the key economic trends that will affect your life, your business, and your investments over the rest of your lifetime.

Mr. Dent is also a best-selling author. In his book The Great Boom Ahead, published in 1992, Mr. Dent stood virtually alone in accurately forecasting the unanticipated boom of the 1990s and the continued expansion into 2007. In his new book, The Demographic Cliff, he continues to educate audiences about his predictions for the next great depression, especially between 2014 and 2019 that he has been forecasting now for 20 years. Mr. Dent is the editor of the Economy & Markets newsletter and has created the HS Dent Financial Advisors Network.

Mr. Dent received his MBA from Harvard Business School, where he was a Baker Scholar and was elected to the Century Club for leadership excellence. At Bain and Company he was a strategy consultant for Fortune 100 companies. He has also been the CEO of several entrepreneurial growth companies and a new venture investor. Since 1988 he has been speaking to executives and investors around the world. He has appeared on “Good Morning America”, PBS, CNBC, CNN, FOX, Bloomberg, and has been featured in USA Today, Barron’s, Investor’s Business Daily, Entrepreneur, Fortune, Success, US News and World Report, Business Week, The Wall Street Journal, American Demographics, Gentlemen’s Quarterly and Omni.

What is Financial Repression?

“Financial repression is how the central banks hijack the free market.”

Other than from the aftermath of WWII, this is the first time that governments around the world have just begun frantically printing money to offset the downturns. The most important thing to understand is that central banks do not just set short term rates; they print money and buy their own bonds to set long term rates to zero.

“When you are a baby boomer approaching retirement, due to financial repression you will get zero adjust for inflation returns. Baby boomers are being forced to go into the stock market on higher yield assets and get crucified.”

Pushing long term rates so low forces people to go into stocks and other financial assets as well as allows firms on Wall Street to leverage up. When this happens you get massive misallocation of investment, and have companies borrowing money to buy back their own stocks to engineer mergers that wouldn’t be possible without such low rates. This bubble we are in, which is greater than any we have been in before, is going to burst and when it does it will wipe out all the excess gains. This financial repression is just going to destroy wealth faster than it artificially built up. It comes down to central banks admitting that they created a bubble, but they won’t because nobody wants to take blame for it while they’re in office. It is a lifetime consumer spending cycle. Most people do not enter the workforce until they’re 20 then they go on a huge spending cycle which eventually slows down at the age of 39 because people buy their largest home well before they peak in spending. We peak at age 46 and continue the trend because of automobile purchasing and especially with QE; the affluent people go to school longer which is followed by their kids and so on. Therefore peak spending for these people happens 6 years later, and it has been magnified due to QE since these are the same people who of the entire population are the ones who tend to own financial assets. “The combination of financial repression, QE, and extreme income inequality has seriously butchered the middle class in America.”

It is a graph of the birth index adjusted for immigration, and then projected forward 46 years for the peak spending of the average person. This is why since 2008 governments have been doing endless QE and stimulus just to keep the bubble going enough so that the affluent people can at least continue spending. This demographic trend will continue to point down until 2022 which is when the next generation comes along. Authorities have been able to hold off the burst as long as they wealthy continue to spend, but they are not anymore. “We are in a bad yield geopolitical cycle, and it is clearly getting worse and it will hit bottom at around 2020.”

The productivity that was created in the 1900s from inventions like the automobile and so on is not present today. Today our economic progression is being backed by Facebook and watching the new viral videos. The point is that these 4 cycles have turned down only twice in the last century before this. It was in the early 1930s, the great depression, and the next major stock crash in the mid 70’s. Governments are fighting the impending crash tooth and nail and have resorted to emergency measures such as zero interest rates and in some cases even negative interest rates. “This is going to be the final bubble. It’s going to be like the great depression, like the 1974-1975 crash, and without a doubt it will be the worst stock market crash you will see in your lifetime and it is going to happen by roughly end of 2017.” “This chart is for people who intend to sit in the market, hoping to get another 5-10%. From it we can see that since November 2014, we have gone nowhere and we are right now at the bottom of the rounder top and I am confident it will not go up from here.”

Europe going to be in deep trouble. Banks are failing in Italy like no tomorrow, and I predict by end of the year Italy will be the next Greece, effectively marking the end of the Euro Zone. They already have immigration problems, debt problems, and slowing growth despite endless stimulus.

China on the other hand, has the biggest stock market in the world and it crashed by 45% in 2 months, and I predict it is going to crash again by the end of this year. So what can the Fed and central banks in Europe do about that? Once that happens it is going to send a shockwave in commodities and especially real estate, since it is the Chinese after all who are buying all the cutting edge real estate throughout the world.

“The next US President might as well walk into office and openly admit that this is a bubble and talk about actions to deal with it, rather than being like his predecessors and claim job creation and economic growth; there is just no chance.”

How Can Investors Protect Themselves?

The idea is to realize that this is a once in a lifetime reset and you have to simply get out of the way. Everything is a bubble that’s ready to pop, just simple get out of risk assets as much as you can. You can either gamble and get 5%-10% return or lose 60%-70% by end of 2017. Bubbles build on denial because everyone benefits, even the average person has a lower mortgage than car payments because of the bubble and zero interest rates. It is because of the fact that everyone benefits that everyone goes in denial.

Precious Metals and The Dollar

“This is a deflationary crisis, and it is the one time that gold will not do well.”

Gold is a bubble as well. Gold went up 8x in 10 years, there are not many bubbles bigger than the gold bubble and now it is bursting. It is bursting because a lot of the gold bubble happened after 2008 as a result of the crisis, and gold went up the most when people thought the massive money printing would lead to inflation but it didn’t. It didn’t because deflation is a trend; when debt bubbles deleverage, money that was created out of thin air disappears. Most of the time in cycles, we either have moderate or extreme inflation, but this is the one time we have deflation and therefore I do not want to be in gold or in commodities.

“The USD has been the best currency; it goes up versus other currencies as it did in 2008. We are still the best house in a bad neighborhood.”

China is going to be the biggest urban disaster in modern history. They have 250 million people that are not even registered citizens working low paying jobs that are primarily focused on building infrastructure for nobody. And when this crash comes, those people are done for.

When stocks crash, price earnings ratios collapse, and risk premiums go up on everything. So if I was in stocks, I would rather be in pharmaceuticals, health and wellness etc. These are the stocks to buy when the Dow goes down to 5500.