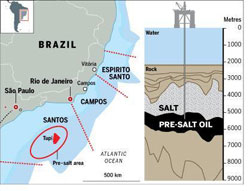 One Emerging Bright Spot in the Gloomy Energy Sector

The energy sector is expected to see a 12% drop in earnings this quarter. But one segment — offshore drilling companies — is bucking the trend. And that’s where the next investing gusher could be.

For example, last month Noble Corp. (NE), the owner of the world’s third-largest offshore drilling fleet, reported that its year-over-year earnings shot up by 250%. Quarterly profits tripled, costly downtime decreased, and revenue grew with the debut of new rigs in Brazil and the Gulf of Mexico.

Demand for deepwater rigs is so strong that Noble and Diamond Offshore Drilling (DO) are already looking at 2014 deals. Production for 2013 is mostly booked at higher levels.

Diamond announced that Ocean Onyx, a rig under construction in Texas, will start a one-year contract with Apache Corp. (APA) in the third quarter of 2013.

Last week Noble revealed a three-year deal for an ultra-deepwater drillship now under construction, in a contract that will average $618,000 per day starting in 2014 — making it one of the company’s most lucrative rigs.

What’s more, the normally reserved Swiss management forecasts a plethora of such deals in the near future.

And the sector leader, Transocean Ltd. (RIG), plans to sell up to $1 BILLION worth of rigs this year, as all the leading rig operators focus on improving their fleets. Fleet utilization at Transocean was 66% for this year’s second quarter, up from 61% in the first quarter.

Again, the rising pricing impact is not limited to just one company …

Transocean’s Deepwater Deep Seas drillship was hired byMurphy Oil Corp. (MUR) at $595,000 per day starting next March, in another sign of strong deepwater demand when compared with its previous $450,000 rate.

The shortage is driving acquisitions, too …

Ensco (ESV), the second-largest offshore drilling company in the world, announced its second-quarter results a few weeks ago. Benefiting from the acquisition of Pride International, the deal doubled Ensco’s net income from the prior year’s quarter. But there’s also room for further earnings growth by moving some of the newer rigs to higher-rate contracts.

So What’s Going On?

Just five years ago, it was widely believed that U.S. oil and natural gas production would follow a path of steady decline.

Now the Energy Information Administration (EIA) predicts that total U.S. liquids production will climb to 12.1 million barrels per day by 2025 — a 38% increase over the 2005 projection.

Several other countries in the Western Hemisphere, including Brazil and Canada, are also expected to post significant increases in oil output … Based on the EIA’s most recent projections, Brazil’s oil output should rise by 2.8 million barrels per day between 2009 and 2035. All the increase will virtually come from the pre-salt fields in the Atlantic, about 200 miles southeast of Rio de Janeiro.

But this is easier said than done as Brazil’s state-controlled oil company, Petrobras (PZE), admits …

These fields are located beneath a mile-and-a-half of ocean and another two miles of sand, rock and shifting salt layers.

Reaching them will require drilling technology even more costly and sophisticated than that used by BP Plc (BP), ExxonMobil (XOM) and other private firms in the Gulf of Mexico. And don’t forget there’s always the risk of a catastrophic blowout like the one that destroyed the Deepwater Horizon.

For Canada, the EIA projects the output from its Athabasca tar sands in the Alberta Province to jump from 1.7 million barrels per day in 2009 to 4.8 million in 2035, an impressive 180% increase.

The bottom line here is that the oil industry is struggling to find enough equipment to meet its surging production demand.

No wonder Atwood Oceanics (ATW) — which owns a small fleet of 10 mobile offshore-drilling units located in the U.S., Gulf of Mexico, South America, the Mediterranean Sea, West Africa, Southeast Asia and Australia — is running at 95% utilization!

That’s why I’m looking forward to Seadrill’s (SDRL) earnings release at the end of this month for more positive news. The Norwegian offshore oil rig operator won a deal potentially worth $4 billion for three of its drillships in the Gulf of Mexico. The deal was one of the biggest in the global rig industry.

My take on this is that offshore drilling companies will continue to be one of the bright spots in an overall gloomy sector, with day rates increasing and rig-utilization numbers growing.

And I plan on watching this segment of the energy market very closely.

Rudy Martin is the former director of research for TheStreet.com Ratings.

In addition to his periodic contributions on this and other financial sites, Rudy writes a monthly newsletter The Latin Capital Market Report and is the editor of Weiss Research’s special report, The Greatest Riches in Latin America.

For more information about Rudy Martin and The Latin Capital Market Report visitwww.latincapitalmarket.com

Rudy appreciates your feedback; click here to send him an email.