Guess Who Bought the Most Shares in Q1… 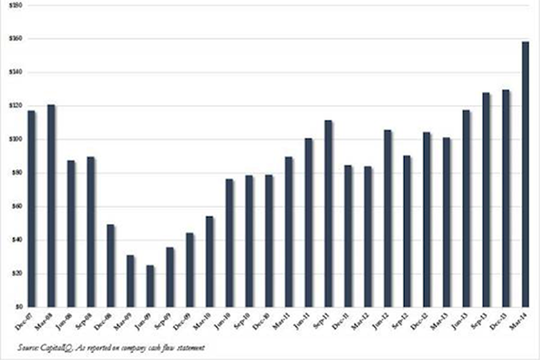 The biggest buyer of US stock in the first quarter of 2014 wasn’t pension funds… or mutual funds… or hedge funds… or banks… or poor old Mom & Pop.

No… The biggest buyers of US stocks between January and March of this year were S&P 500 companies. In total, they bought back $160 billion of their own stock. What’s that you say? Stocks are expensive right now? Isn’t the point of buying stocks to get in at a low price and sell at a high price?

Well, you’d be right. Unless you were an S&P 500 company with access to the Fed’s zero-interest credit.

Want to buy back stocks at peak prices? No problem. All you need is to take on new debt at near-zero interest rates and shovel that money into stock buybacks.

Then through the magic of supply and demand, whatever outstanding stock you leave in the market will be worth more. Because now there’ll be less supply to meet demand. And prices will go up.

It’s been a popular way of goosing the market. Going back to 2012, total corporate debt issuance has been about $32 billion. And total stock buybacks have totaled $34 billion.

Aren’t companies supposed to invest in the growth of their businesses? Isn’t EPS (earnings per share) growth supposed to come from more “E,” not less “S”?

Not in a topsy-turvy world…

But the biggest splurge by US companies on their own stock didn’t come in in 2014.

Looking at stock buybacks over the preceding 12-month period, that honor goes to 2007, when corporations bought $560 billion of their own stock back.

And you know what happened next…

P.S. If you are concerned about a peak in stocks… and another crash… you’ll want to read Bonner & Partners senior analyst Braden Copeland’s report on what to do when the next crash comes.