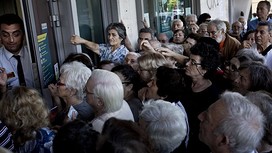 A Greek bail-in could resemble the rescue plan agreed by Cyprus in 2013, when customers’ funds were seized to shore up the banks, with a haircut imposed on uninsured deposits over €100,000.

It would be implemented as part of a recapitalisation of Greek banks that would be agreed with the country’s creditors — the European Commission, International Monetary Fund and European Central Bank.