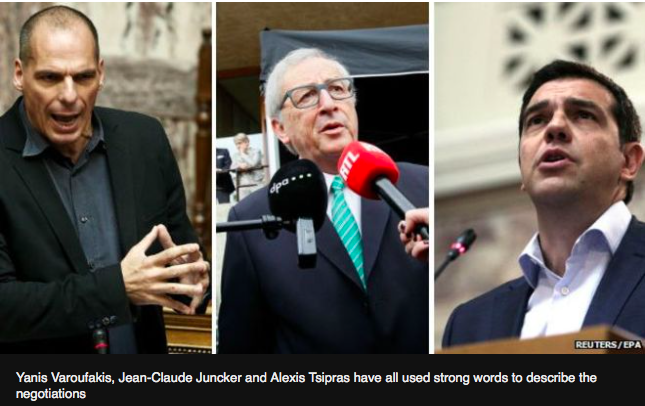 Based on the continued failure of the negotiating parties to make any substantive progress in the talks over Greek debt payments, the financial world is tied up in knots over a possible Greek exit from the European Union. The uncertainty has manifested in both high and low finance, with a sharp sell-off in bonds, particularly EU and Greek government debt, and heightened retail withdrawals from Greek banks as depositors become wary of capital controls that would be imposed in the case of an exit. All concerned parties should likely breathe easier. Despite Greece’s almost complete lack of financial integrity, neither NATO nor the EU can afford the political cost of a Greek exit from the EU.

The unacceptable specter lurking behind the EU negotiators is that, if Greece is shown the door by the EU, Russia or even China might step in to provide financing to Greece in return for a strategic foothold in Western Europe and gateway to the Eastern Mediterranean. This is a

As reported several months ago in this column, modern Greece has been used continuously by Europe as a bulwark against unwanted incursions. In the 1820s, Greek independence from Ottoman Turkey was financed and supported by Western powers as a way to contain and rollback Turkish influence in the Mediterranean. In the 20th Century, Greece became a key battleground of the Cold War, with the West expending considerable blood and treasure to ultimately keep socialist Greece from falling into the Soviet orbit.

Although the Greeks received countless sums from abroad, Greek governments have been notoriously feckless, and have been instrumental in ensuring their nation’s economic demise. By opting for generous socialist entitlements and blatantly anti-capitalist regulations, Greek governments decided to borrow irresponsibly to meet its obligations.

With the formation of the European Union (EU), strenuous efforts were made to include Greece to prevent the rise of Communism. This encouraged the surreptitious acceptance of untruthful economic statistics to facilitate Greek membership, both of the EU and the Eurozone.

Eurozone membership gave Greece access to vast amounts of cheap debt, offered largely under the false assumption that an early conclusion of a single political union would offer an implied EU guarantee for Greek debt. It was similar to investors assuming, erroneously, that the debt of Freddy Mac and Fannie Mae carried the ‘implied’ guarantee of the U.S. Government.

But, as was the case with Fannie and Freddy (whose collapse many believed would have plunged the U.S. into deep Depression), the political cost of failure was too great to accept. Therefore, the financial costs of technical failure had to be borne by citizens. In addition, over the past few years, much of the Greek debt has been transferred from EU banks to EU governments that have the much abused ability to pass the bad debt onto future generations of their citizens.

Likely aware of this, the Greek government has faced off repeatedly against some of the world’s most powerful politicians and central bankers, winning time and yielding little.

Even more importantly, when Greece’s socialist Prime Minister Alexis Tsipras faces Germany’s Chancellor Angela Merkel, he knows that she is acutely aware that any soft deals offered to Greece may be seen as a precedent encouraging Portugal, Ireland, Italy and Spain to push (even acting as a united block) for similarly favored treatment. Furthermore, any perceived increase in the prospect of a potential break-up of the EU might encourage voters in Great Britain, in the 2017 referendum, to vote to leave a sinking ship. A British exit could put an end to the European dream and place at risk trillions of dollars’ worth of European debt and even the Euro-currency itself.

In addition to these serious concerns, Merkel has one overriding fear. Should talks break down, Greece will likely go searching for other sources of funding. It may find many willing givers, all with strings attached. Russia may offer funding to Greece in return for a naval base. If not Russia, even China might attempt to offer a vast, soft funding rescue package in order to buy entry to the European and NATO landmass. It is no secret that China has a strong interest in taking over operations of the Port of Piraeus, one of the largest ports in the Mediterranean.

While Merkel and her supporting fellow EU leaders may talk tough to Greece’s leaders, they know it is politically unacceptable to allow a financial default to open the way to EU dissolution or the slightest possibility of a Russian or Chinese strategic incursion.

As a result, whatever the eventual financial costs to EU taxpayers of a Greek default, the political costs of a Greek exit are likely to be seen as unacceptable. Therefore, after much posturing, delays and threats, I believe that the chances of an actual Greek exit are far lower than are commonly believed. Most likely the EU will allow a covert Greek default, disguised for the time being by extended repayment schedules, bogus refinancing formulae and possible delayed haircuts as bonds mature. They may insist that such moves are not a technical default. Despite that absurdity, our obedient press corps may even concur with such a characterization, and investors may be so thrilled that a relief rally occurs in stocks and bonds. Extend and pretend will once again be the only acceptable manner to confront our intractable problems.

John Browne is the Senior Market Strategist for Euro Pacific Capital, Inc. Mr. Browne is a distinguished former member of Britain’s Parliament who served on the Treasury Select Committee, as Chairman of the Conservative Small Business Committee, and as a close associate of then-Prime Minister Margaret Thatcher. Among his many notable assignments, John served as a principal advisor to Mrs. Thatcher’s government on issues related to the Soviet Union, and was the first to convince Thatcher of the growing stature of then Agriculture Minister Mikhail Gorbachev. As a partial result of Browne’s advocacy, Thatcher famously pronounced that Gorbachev was a man the West “could do business with.” A graduate of the Royal Military Academy Sandhurst, Britain’s version of West Point and retired British army major, John served as a pilot, parachutist, and communications specialist in the elite Grenadiers of the Royal Guard.

In addition to careers in British politics and the military, John has a significant background, spanning some 37 years, in finance and business. After graduating from the Harvard Business School, John joined the New York firm of Morgan Stanley & Co as an investment banker. He has also worked with such firms as Barclays Bank and Citigroup. During his career he has served on the boards of numerous banks and international corporations, with a special interest in venture capital. He is a frequent guest on CNBC’s Kudlow & Co. and the former editor of NewsMax Media’s Financial Intelligence Report and Moneynews.com. He holds FINRA series 7 & 63 licenses.