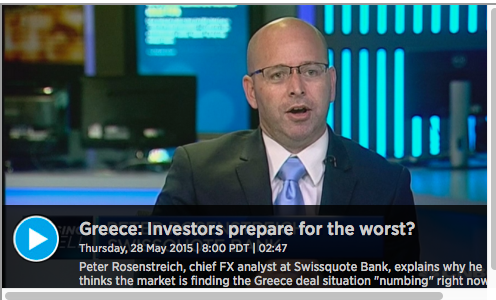 The long-running Greek debt tragedy is almost over. The International Monetary Fund may be the first to blink at the end of next week, triggering another global financial crisis. Not surprisingly for financial markets the worry at the moment is Greece, Greece, Greece.

International Monetary Fund CEO Christine Lagarde told Germany’s Frankfurter Allgemeine Zeitung she could not ‘preclude’ a Greek exit, after four months of tortuous bail-out talks that have failed to get both sides closer to a deal to release aid to the country.

‘No one wishes the Europeans a Grexit,’ said Ms Lagarde, hinting that Greece is closer to leaving the single currency than ever before. Extinguishing recent hopes in Athens that the two sides were ready to draft an agreement by the end of the week, Ms Lagarde said recent optimism over the country’s future had ’sobered’.

‘It’s very unlikely that we will reach a comprehensive solution in the next few days’, Ms Lagarde told the newspaper during a summit of G7 leaders in Dresden on Thursday.