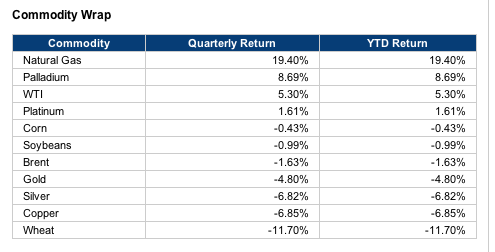 We examine the latest developments in commodity markets.

Commodities saw notably divergent performance during the first quarter of the year. Natural gas, palladium and WTI performed particularly well, while gold, silver, copper, and wheat tumbled. Stocks, as measured by the S&P 500, advanced an impressive 9.7 percent in the period.

The quarter was a strong one from the perspective of investor appetite for risk. Catapulted by the resolution of the U.S. “fiscal cliff” at the start of the year, stocks climbed steadily throughout the period. Though the “sequester,” or $85 billion worth of automatic government spending cuts, went into effect, it did little to derail the rally. With political intransigence no longer an issue, investors were able to focus on the emerging strength in the U.S. economy.

The data have been unquestionably bullish. Housing indicators for sales, construction and prices are at the highest levels since 2008 or 2009, while the unemployment rate is similarly at the lowest level in four years.

At the same time, the Federal Reserve has maintained its ultra-loose monetary policies, pledging to continue its $85 billion worth of monthly bond purchases until the unemployment rate falls even further.

But while the U.S. has been a bright spot in the global economy, elsewhere, things aren’t as rosy. China’s growth remains rather tepid, with expectations that the Asian giant will grow somewhere in the range of 7.5 to 8 percent this year. That has dampened demand growth for commodities such as copper, oil and soybeans and is likely why prices suffered thus far this year.

Europe is also a drag. The banking crisis in Cyprus is just the latest indication that the eurozone is not out of the woods when it comes to its debt problems. While far from the record levels set in 2011, Italian and Spanish bond yields are relatively high near 5 percent, suggesting that markets remain concerned about the debt burden in those countries.