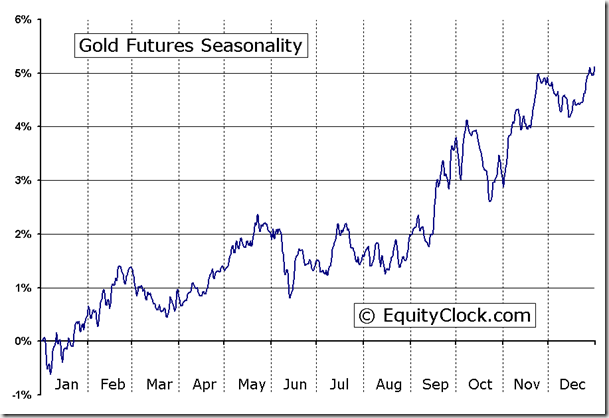 With Europe in Financial Crisis, the US Debt soaked and struggling economically, the biggest influence on gold prices right now is the expectation towards more monetary easing, either out of Europe or the U.S. That’s the No. 1 driver. For Gold investors this happily coincides with Equity Clock’s seasonal and technical studies which clearly show that Gold typically embarks on a significant upward swing during the month of August. Furthermore, as the second chart shows that Gold in US Dollar Terms is not only down 16% from its high, it is breaking out of a yearlong descendng triangle, typically a reliable technical indicator. Gold Mining issues outperformed this week too, as another indication that this rally is getting underway. The GDX is up 4% so far and the GDXJ is up 4.5%.

One interesting facet is that Silver is in Backwardation. Backwardation occurs when the future price of a commodity (gold, silver, oil, corn, etc.) is less than the current spot price. In other words, the price you pay now is higher than the price you have the option of paying a month later. . .two months later. . .or a year later.” The result, according to Brian Hicks of Wealth Daily, is “Historically backwardation means one of two things:

2) silver traders believe the price of silver is about to take off.” Hicks continues, “Basically it means that there are relatively few silver owners that are willing to sell their bullion holdings. As a result of this tight supply, there’s an increasing amount of demand for bullion that is jacking-up the current spot price of silver. And that’s the significance of backwardation. The current spot price of silver is an accurate record of the real spot price of physical silver as long as people are willing to exchange currency for silver at that price, which is why backwardation is so important.”

James Turk pointed out in an interview with King World News that gold may also be in backwardation. Turk says, “I think it is, even though the gold forward rate doesn’t show it simply because dollar interest rates are manipulated. I think to a large extent gold interest rates can’t be manipulated any more than they have been. So the true reflection of the market is you have a backwardation, but it’s not obvious because of the various interest rate manipulations that are going on. That’s very bullish. Whenever you get the metals in backwardation it’s a very bullish situation. I” I think that’s what we’ve got right here.” Turk also commented, “The bottom line is we are in a fiat currency bubble. Eventually this bubble is going to pop because we are using this fiat currency, backed by nothing, not just in one country, but throughout the world”.

John Embry of Sprott Asset Management says that the next big move in gold may be the result of supply more than demand. He told King World News, “I have been a long time proponent of the idea that we may very well be at peak gold production in the world. We may have seen the peak. The problem is that all of the low hanging fruit has long since been plucked. The high grade ore bodies in geopolitically (friendly) places have (already) been mined and a lot of these open pits have been mined. And they (open pits) have a very finite life. Underground mines last forever (by comparison). But the fact is all of the easy stuff has been mined and where you are now finding anything of significance, it tends to be in geopolitically unattractive areas. They are hard to mine and they are going to be extraordinarily expensive to mine… I don’t worry too much about the fact that the production profile can’t grow that much because ultimately that will be extremely bullish for the gold price. This is a classic supply/demand squeeze. We know that demand is rising in many parts of the world… If there is no greater amount of gold coming out of the ground, the only thing that can arbitrate where the gold goes is price, and the price will go up a lot. I think the gold price could go up to multiples of the current price.” Embry is even more bullish on silver: “I have been of the long held opinion that if we get into a raging bull market, which we are going to in the two precious metals, that silver will head towards the low end of the gold/silver ratio, which is currently over 50. In real bull markets, it will fall as low as 10 or 15 (to 1). If that happens, silver will move up three times as fast as gold by the time this is all over. And I think gold is going a long ways, so you can get really excited about the upside potential in silver.”

The Bottom Line? The framework for a strong move higher in Gold has become established.   In addition to increased inflation expectations, the US Dollar index has also come under pressure over the course of the past month and a minor head-and-shoulders top can be spotted on the charts.   The target of this topping pattern points down to 81, also the point at which the price action would intersect with the rising intermediate trendline.  As you can see in Equity Clocks Seasonality Chart below, the US Dollar Index seasonally declines, on average, between now and September, supporting commodity prices, such as Gold.