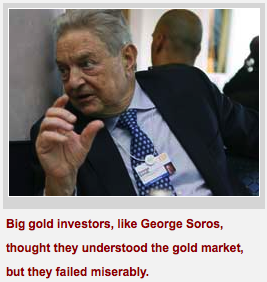 Almost no one thought gold and silver could ever get hit as hard as they’ve been. Not even the likes of big gold investors like George Soros … John Paulson … Rick Rule … Jimmy Rogers, and many others.

The thing is, they don’t really understand the gold market. They thought they did, but they failed miserably.

There are times where no amount of money-printing can inflate gold and silver prices because, very simple again, either investors are too scared to do anything with their money … or they see better opportunities elsewhere, like in stocks. I could go on and on about how the bigwigs missed most or all of the correction in gold and silver and how many billions they and others lost.

But there’s no need for that. But for a short period last year, I got it right, and I helped my readers and subscribers avoid steep losses, and helped them make pretty big profits to boot.

So instead, I want to now turn your attention to what the next bull market will look like for gold and silver — to the forces that will drive metals higher again — once gold and silver finally do bottom.

The bottom isn’t here yet. But by preparing you for the future and for what will drive precious metals higher again once the bottom does come — you will be light years ahead of other investors.

First, and perhaps most importantly, central bank money-printing will NOT be the major force driving precious metals prices higher in the future.

So let me be perfectly clear, if you’re counting solely or largely on central bank money-printing to drive gold and silver prices through the roof in the next leg up, then you’ll miss the real reasons the metals will go higher.

Money-printing, this time largely in Japan and Europe, will be a force, but it will not be nearly as strong a force as it was in the metals first leg up from 2000 to 2011.

The reason is simple: Between the towering inferno of as much as $158 trillion of global debt with weak underpinnings and derivatives bets that now approach more than $1.2 QUADRILLION in notional value …

There is simply no way central banks could ever print enough money to stabilize the global monetary system.

So print or not, the next leg up in the precious metals will not be  driven by money-printing. It will be driven largely by a breakdown in the global monetary system.

A breakdown in the global monetary system means there will be big banks and financial institutions going belly up … sovereign nations, especially in Europe going bust … Washington going bust … and sovereign bond markets collapsing to 10 cents on the dollar.

Money-printing will not solve or prevent or even delay those things from happening in the next several years. Period.

Gold and silver, once they do bottom, will start rising again because savvy investors are finally beginning to realize that their Emperors really do have no clothes, and all the money-printing in the world won’t be able to cover that up.

Second, inflation will NOT be a major force either. Don’t get me wrong. We do face higher inflation in the years ahead. But that part of gold and silver’s next leg up is still a ways off and won’t arrive until late 2015 or early 2016.

And even then it won’t be a big factor: Reason, despite what most pundits say, the U.S. will never face hyperinflation.

The reasons are simple: First, despite all the flaws in the U.S. dollar, it’s still the world’s reserve currency. And when the rest of the world, again, mainly Japan and Europe, are having so much trouble, it means the dollar will be a magnet for capital, keeping it from plunging into an abyss, thereby avoiding hyperinflation.

Second, is the size of our debt markets. They too are, like the dollar, an exorbitant privilege we have over the rest of the world. Come any signs of major inflation, the bond vigilantes will send rates higher, killing much higher inflation rates in their tracks.

Third, are the war cycles I’ve been warning you about. In previous articles, I’ve told you how the impact of the war cycles is already beginning to show in many different geo-political realms.

In Syria, in North Korea, in the Cyprus confiscation of depositor assets, in Russia’s moves in Ukraine, in China and Japan’s war of words over the Senkaku islands, in China’s moves in the South China Sea and more.

This is going to ultimately be the most important force driving precious metals higher. It will coincide with the first force above, the collapse of the world’s monetary system.

And where governments are at war with their own citizens — repressing more and more liberties and personal freedoms, chasing down assets to tax and confiscate, and more.

In other words, total upheaval of modern society, coupled with a collapse of the global monetary system.

In a nutshell, those are the real reasons gold and silver prices will soar in their next leg up. Not inflation alone. Not money-printing alone. Not even currency devaluations alone.

Get it right, and you will be buying gold and silver near their lows in 2015, when just about everyone else is throwing in the towel.

Right now, I still expect to see gold below $1,000 early next year. Then the bottom will be in.

After that, the lid will come off, and the precious metals will begin their inevitable march higher, to $5,000 gold and at least $125 for silver.

For now, remain hedged up or outright bearish per my suggestions in these columns to use inverse ETFs. They are serving you well, with nice open gains.