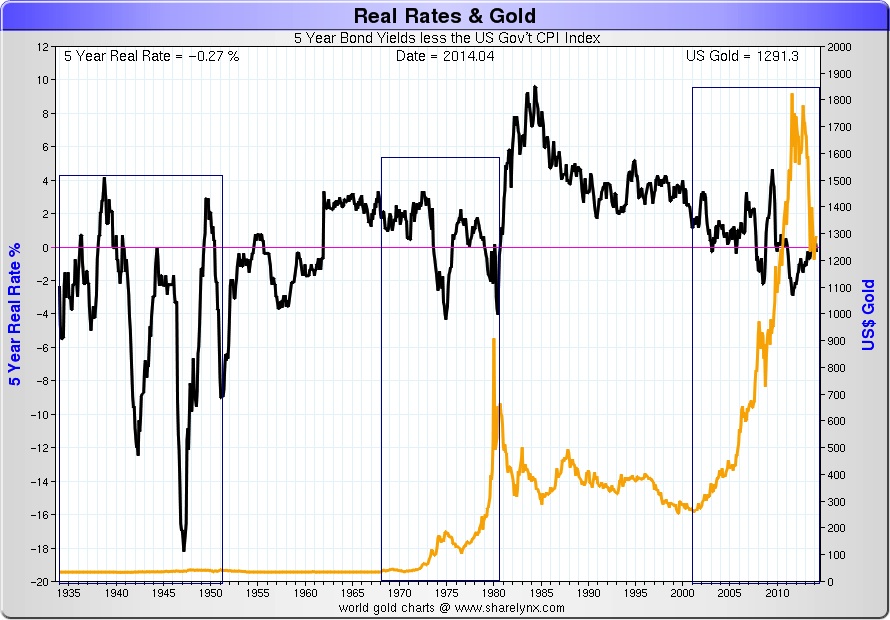 Barry Ritholtz is out with another article spelling more doom for the precious metals sector and the gold bugs. The self proclaimed “Gold Agnostic” penned a 2500 word missive in January which followed a blog post amid the spring 2013 collapse titled “What are Gold’s Fundamentals.” For the record, Ritholtz’s calls on the markets and Gold have been very good. He was bullish during most of the 2001-2011 advance and sold out prior to the 2013 breakdown. Give credit where credit is due. Yet, while the anti-gold and anti-gold bug mainstream eat up his Gold analysis like a lap dog we have to mention some errors and a startling omission of Gold’s key driving force.

Despite having spilled tons of ink on the subject, Ritholtz has continually failed to mention the major driver of Gold which is the direction of real interest rates. Ironically, Ritholtz often writes about following the data and avoiding narratives, yet he ignores this when discussing the yellow metal. Gold rises when real interest rates are negative or declining sharply. Its simple to understand. If investors and fund managers can earn a real rate of return on a money market fund, CD, or bond then there is no need for an alternative currency. If you can’t earn a real rate of return safely then you’ll seek alternative currencies such as Gold and Silver. The following chart from Nick Laird shows real rates and Gold over the last 80 years. The venerable Ned Davis Research, as reported in Barrons yesterday noted that real interest rates recently have turned favorable for Gold. That is probably why they concluded that the bull is alive but wounded. Capital Economics, as reported by Frank Els also notes in a report that the real yields have declined. I happen to agree with NDR’s view that the short-term technical situation is not conducive to speculative positions. Last week we wrote that Gold could fall to $1080 before the bear ends. A weekly close below $1200 would likely trigger that final washout.

Ritholtz’s arguments for the end of Gold’s secular bull are surprisingly weak. Of course none revolve around the end to negative real rates. He cites a chart and some commentary which regards the dollar rebound as potentially an epic squeeze. This Business Insider style observation bears no reality. The US Dollar index is up less than 2 points in the last month and the commitment of traders report does not show a huge speculative short interest conducive to a short squeeze. Ironically, the epic squeeze is likely to come in Silver and on a lesser scale Gold. Gross short positions in Silver reached a new all time high last week. Further weakness in both metals could setup a large short squeeze in the coming months.

By now you know that Ritholtz’s conclusion (the bullish factors from 2001-2011 are gone) is incomplete and irrelevant. His five points help explain the bear market in Gold but none of them reveal anything about an end to negative real rates, which is the key driving force. If one wants to make a case that the secular bull is over then they need to make the case that real rates have bottomed and will rise indefinitely. This is what happened following 1951 (commodity peak with gold price fixed) and 1980. With the latest uptick in inflation and decline in yields, real rates are again negative and trending favorably for Gold.

Statistically speaking inflation has almost no downside and has in fact started to trend higher. Core inflation in the OECD countries is at an 18 month high while inflation in Canada is at a two year high. The CPI and PCE in the US have started to tick up. MIT’s Billion Prices Project which has led the CPI at key turning points since 2009 has accelerated higher since December 2013. This implies the CPI has further upside. With regard to rates, we know that each 1% rise in rates equates to an additional ~$180 Billion in interest costs. That is over 6% of FY 2013 federal revenue. Policy makers want but more importantly need inflation to get the debt burden under control. Real rates were strongly negative for much of 1942 to 1949. Inflation surged while real growth stagnated but we got the debt burden under control. It led to a tremendous uninterrupted equity advance from 1949 to 1956. However, that was after a rip roaring advance in hard assets.

Hopefully this missive cut through both the bull and bear BS on Gold. Gold bugs will shamelessly promote anything as bullish while gold bears will mention anything but the only fundamental that matters, negative real interest rates. The historical bear analogs, sentiment and negative real rates argue that the precious metals complex is nearing the conclusion to a cyclical bear market within a secular bull. If you’ve followed my work you will know that I have been bearish since the hard reversal in March. Patience and discipline will be the name of the game over the coming weeks. Discipline is required to exit hedges at the right time while patience is required to buy as low as possible. I am looking at JNUG (3x long GDXJ) as well as several juniors I believe have exceedingly strong upside potential over the coming quarters and years. If you’d like to know which stocks we believe are poised to outperform after the coming low, then we invite you to learn more about our service.