Posted by Richard (Rick) Mills - Ahead of the Herd 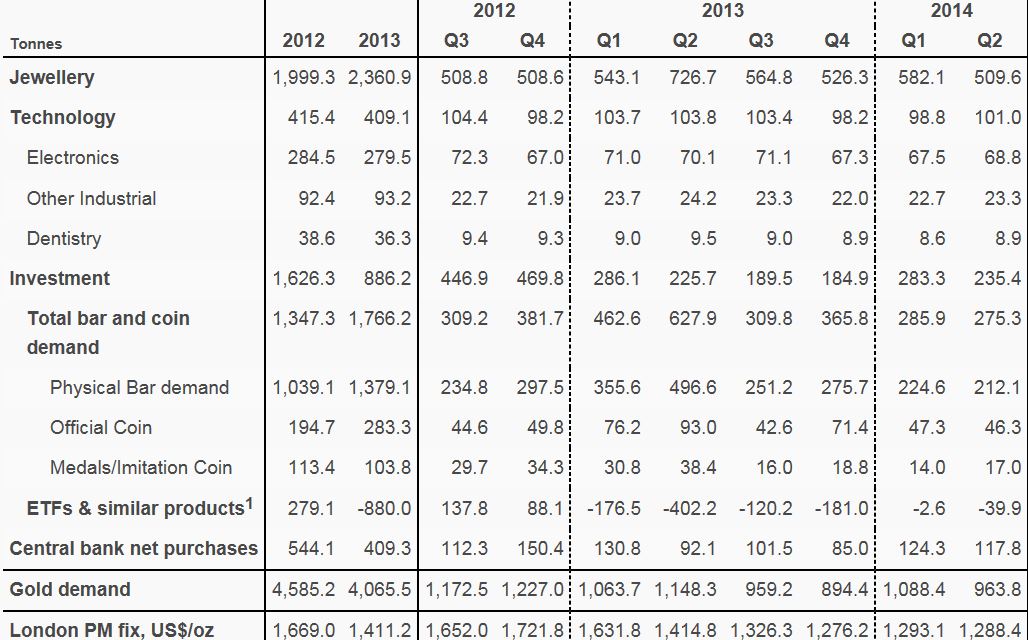 Central Banks continued to buy gold for the 14th consecutive quarter in Q2 2014. CB’s purchased 118t in Q2 2014 up 28% over Q2 2013. The announcement of a fourth CBGA in the second quarter also reiterated that sales will not be forthcoming from some of the largest holders.

Jewellery demand weakened year-on-year, but the broad, 5-year uptrend remains intact. Jewellery accounted for 53% of gold’s global demand and is by far and away the anchor of gold’s market. Around 19 per cent of production comes from Africa and 5 per cent from Central Asia and Eastern Europe.

Recycling accounts for around one third of the total supply of gold.

Thanks to the World Gold Council you now know where gold comes from, whose buying it and what they use if for.

Deeper into the #’s

Two mostly unrecognized influences are at work in the global gold market, unsustainable production levels and a shifting of demand focus.

Many miners are processing greater quantities of ore to maintain revenue and contain costs at today’s lower gold prices.

It’s also very possible some companies are focused on solely mining the higher grade portions of their mines. The result is higher production and lower costs over a short term, but it is not sustainable and means a much higher gold price is needed to economically mine the lower grades left.

The focus of the gold industry is shifting east.

The key driver of gold’s price over most of the last decade was institutional investors buying gold bullion through exchange-traded funds (ETF). That changed in 2013 with investors dumping 800t or 31m ozs.

On the other side of the trade was an enormous physical, almost insatiable, gold demand coming from Asia. According to GFMS China imported unprecedented amounts of gold from the rest of the world and became the world’s largest consumer of jewellery last year, with demand rising 30% to 724 tonnes.

The quest for gold

Over the past two dozen years mining companies have discovered 1.66 billion ounces of gold in 217 major gold discoveries. That’s a lot of gold!

“The amount of potential production from these major discoveries is particularly concerning when looking at the discoveries made in the past 15 years. Assuming a 75% rate for converting resources to economic reserves and a 90% recovery rate during ore processing, the 674 million ounces of gold discovered since 1999 could eventually replace just 50% of the gold produced during the same period.

However, considering that only a third of the discovered gold has been upgraded to reserves or has already been produced, and that many of these deposits face significant political, environmental or economic hurdles, the amount of gold becoming available for production in the near term is certainly much less.

The length of time from discovery to production is expected to continue trending higher: 63 projects now in the pipeline and scheduled to begin production between 2014 and 2019 are expected to take a weighted-average 19.5 years from the date of discovery to first production.” Kevin Murphy, mining.com

The production of mined gold remains well below market demand. As long as demand exceeds mined supply how can gold’s bull run be over? Your author doesn’t believe it can be.

The best way to profit is to buy when everyone else has sold and assets are at rock bottom prices. That would be now.

Your best bet for high returns will be to invest in junior resource companies.

After all, they find the deposits, so they own the world’s future mines, yeah that’s right, junior resource companies own the gold the gold miners need to replace their reserves.

Why don’t we all ignore the endless bombardment of economic white noise spewing from mainstream media outlets and instead concentrate on gold’s fundamental supply problems?

I’ve got a couple promising junior gold companies on my radar screen. Do you have a few on yours?

Furthermore, I, Richard Mills, assume no liability for any direct or indirect loss or damage or, in particular, for lost profit, which you may incur as a result of the use and existence of the information provided within this Report