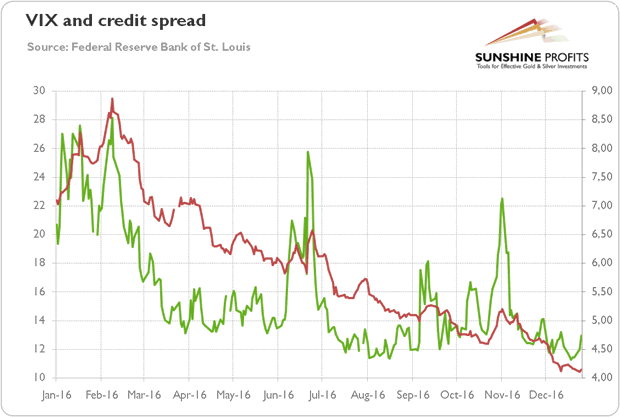 Predicting, especially the future, is very difficult. Still, let’s try to figure out what investors should expect from the gold market next year. For sure, in the long run, the price of gold will mainly depend on the U.S. dollar, the real interest rates, and the market uncertainty. How will these factors develop and affect the gold market?

Well, as one can see in the chart below, the level of investors’ confidence has strengthened recently, as both the market volatility (represented by the CBOE Volatility Index) and credit spreads (illustrated by the BofA Merrill Lynch US High Yield Option-Adjusted Spread) have diminished after the U.S. presidential election. Hence, the risk aversion should be low for a while, and so the safe-haven demand for gold. Surely, if such risks as China’s hard landing, the banking crisis in the Eurozone or the turmoil in the U.S. bond markets materialize, gold may again shine as a safe-haven asset. However, investors should remember that gold failed to rally on negative news in 2016, while stock markets flourished. And what about the U.S. dollar and real interest rates? As the next chart shows, both indices have been rising since October, which corresponded to the plunge in gold prices.

Will this trend continue in 2017? Well, it depends mainly on three things: 1) the expected pace of the Fed’s tightening; 2) divergence in the monetary policies among major central banks in the world; 3) the market sentiment toward the Trump’s policies. Let’s analyze them now.

The Fed’s hiking will be gradual, for sure. However, it would be difficult to be more gradual than in 2016, when the U.S. central bank managed to lift interest rates only once, exactly one year after the previous hike. With the labor market near the full employment and rising inflation and inflationary expectations, two or three hikes in 2017 are not impossible, unless we witness recession, of course. Therefore, the U.S. dollar and real interest rates may be under upward pressure next year, which would not support the price of gold.

The divergence in the Fed’ stance compared to the rest of world should also strengthen the U.S. currency and real interest rates. The American economy will grow faster than other developed economies which would translate into more hawkish monetary policy. Just as a reminder, the ECB just extended its monthly asset purchase program by nine months and relaxed its rules, while the FOMC members revised its projections for the federal funds rate in 2017. Given the fact that the interest rates are not going up in the Eurozone any time soon and a whole bunch of economic problems the Europe faces, including the upcoming important elections in several countries, we believe that the U.S. dollar will strengthen against the Euro in 2017. The same applies also to the USD/JPY exchange rate, especially given the yield curve management introduced by the Bank of Japan in September 2016. As the BoJ tries to maintain the Japanese 10-year rate around zero percent, the spread between U.S. and Japanese real interest rates should widened further, which would strengthen the greenback and soften the price of gold.

The market sentiment toward gold will be shaped also by the expected effects of the new administration’s policies. Donald Trump will take office on January 20, 2017 and we will probably see important changes from the very beginning of the presidency. Investors now await the “great rotation” out of bonds and into stocks, as the heavy government spending and higher fiscal deficits under the new president are believed to lead to higher bond yields. If Trump fulfills such hopes, the price of gold will take a hit. On the other hand, if the “Trump rally” turns out to be only a mirage, there will be a relief in the gold market.

Summing up, the major fundamental forces affecting the gold market in 2017, they will be the strength of the U.S. dollar, the dynamics of the real interest rates and the level of fear in the markets. The political and market uncertainty diminished after China’s turmoil, the Brexit vote and the U.S. presidential election. The world is full of risks, but the sad fact for the gold market is that financial markets showed great resilience to them in 2016, shrugging of practically all bad news, or even rising on them. Therefore, although investors should not downplay the potential threats to the global economy, they should focus on the relationship between gold and the greenback with real interest rates instead of the safe-haven appeal of the yellow metal. We believe that the fundamental outlook for the gold market is rather bearish in the near future, until markets lose their faith in the pro-growth policies of Trump or financial turmoil will force the Fed to adopt a more dovish stance.