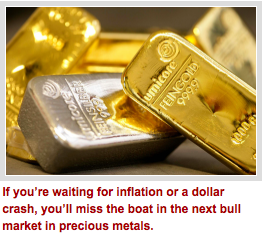 Larry here, with an important message. Right now, gold is still caught in a trading range, but with a long-term bias toward exploding higher over the next few years to at least $5,000 an ounce.

In other words, gold is in the pressure-cooker right now, and once it blasts off, there may be no turning back.

I have another important warning for you: If you think gold’s next major move higher will be due to inflation, think again: Gold’s next leg higher will be primarily caused by Western society tearing itself apart at the seams.

Not because of inflation. Not because of a collapse in the U.S. dollar, which one well-known — but almost always wrong — analyst keeps predicting.

Just consider all the spying that’s going on which has increased, not decreased. If you haven’t already, go see the excellent documentary “Snowden.”

Where you’ll learn of how our government has a dragnet and has intruded into the privacy of not just every American citizen via electronic devices, but every individual in the world via computers and cell phones. And yes, even heads of state.

Or the moves by many developed countries to go to a digital currency. Or the many countries that are now implementing various capital controls.

Or the high-level cyber-espionage now happening.

Or, Obamacare, a disaster of epic proportions.

Then there are the new moves, behind closed doors in Washington, to make depositors in U.S. banks creditors of the bank, meaning if the bank goes under, a certain amount of your deposits is at risk of substantial loss, as if you were a shareholder in the bank.

And then, of course, there’s the fact that our country is dead broke, bankrupt, and there will be no recovering from it until the system crashes and burns and is allowed to start over, anew.

And my war cycles, which are heating up again in 2017, with May/June showing the most volatility and danger, especially in Europe — forecasting civil strife, a further decline in the euro, Italy leaving the EU and more.

Riots in the streets of Europe and the U.S. More turmoil and war in the Middle East. More friction between China and Japan over the Senkaku Islands. Between China and Southeast Asia over the South China Sea. And more.

All this is why I want you to understand the real driving forces behind the next bull market in the precious metals.  Because if you don’t — and instead you’re waiting for inflation or a dollar crash — you’ll miss the boat, big time.

And I don’t want that to happen to you.

So the question then is “Has gold bottomed?”

Yet, according to my Artificial Intelligence Neural Net Model (the E-wave), it’s showing a decent rally should be forming, which has indeed already started.

That rally should extend into mid-April before a pullback sets in. Look for resistance at the $1,200 to $1,220 levels. Support will be initially found at roughly $1,167 and $1,130. Silver and the other metals — platinum and palladium — will generally follow gold’s path.

Stay tuned, very tuned in to my writings and analysis of the gold market. In fact, of all major markets. And be sure to read my E-wave columns each Monday, Wednesday and Friday afternoon publishing around 4 p.m. EST. They are short, but very insightful.