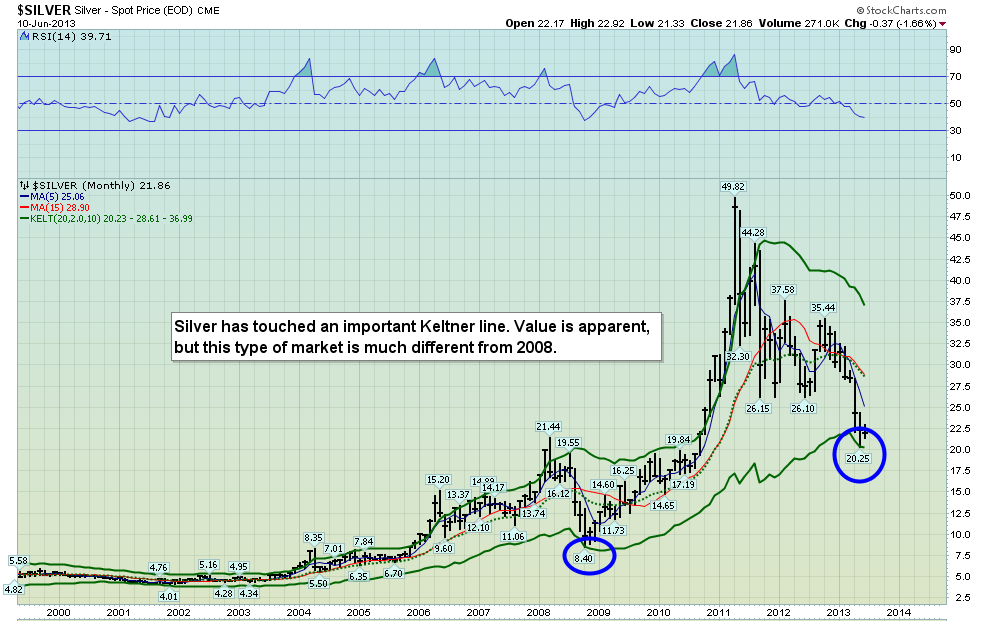 1. The saying, “Close, but no cigar!” could probably be used now, to describe gold & silver investors trying to call a turn in the market.

2. Bank analysts are more bearish. UBS technical strategist Richard Adcock says,“The next leg of the bear trend is to be seen down to the long-term 50 percent retracement point at $1,303, which we would set as our objective.”

3. The action of my gold market stokeillator (14,7,7 Stochastics series on the daily chart) suggests that Adcock could be correct. Please click here now . Double-click to enlarge. In the short term, gold has broken down from a small but bearish rising wedge pattern.

4. The $1300 – $1320 area seems like a reasonable short term possibility, and it’s important to note that banks are rumoured to be aggressive gold buyers now.

5. Only gamblers (anyone using leverage is a gambler) should hedge now, to avoid further price declines. Everyone else should be engaged in very light buying.

6. In a super-crisis, severe account drawdowns are just part of the “great gold game”. You can’t avoid them anymore than you can avoid breathing air. What matters is being able to carry your head high, regardless of where gold is priced.

7. The action of bond prices has a lot to do with how the gold market moves. In the late 1970s, inflation began to spike, and the Fed started aggressively raising rates.

10. Are there parallels between that period and today? Well, bond prices stalled out in September of 2011, and so did gold.

11. There is now a large head and shoulders top pattern on the weekly T-bond chart. Please click here now . The technical target of that top pattern is roughly 126.

13. In fact, the opposite appears to be happening; the COT reports show the banks are buying gold aggressively, and here’s why they would do that: By 1980, interest rates on long term bonds were near 20%.

14. Today, those interest rates are only about 3%.

16. What the current decline in bond prices suggests is that global quantitative easing policy, combined with the lightly strengthening economy, is creating inflation.

17. At this point, that inflation is very moderate. Everyone in the gold community knows that prices of what people really need are rising, while governments issue reports that seem to be “massaged”.

18. It would appear that banks are buying gold, rather than shorting it, because they believe the deflation cycle is ending, and a cycle of rising inflation is beginning.The action of the T-bond suggests they are correct.

19. The Fed believes the business cycle is approximately 8 years long. This would suggest the global economy that peaked in 2007 will peak again, in 2015. In the meantime, if the economy continues to strengthen and interest rates continue to rise, there will be more price inflation, but it should still be quite moderate.

20. After 2015, as the Fed’s business cycle transitions from “up” to “down”, substantial stagflation is likely to begin, because central banks may feel compelled to print vast amounts of fiat currency, to counter the downturn.

21. This could cause institutions to panic, and buy gold. At the same time, new Asian gold ETFs should be well-established, enabling hundreds of millions of Chindian (China & India) citizens to buy gold easily, “likely without” affecting the current account deficit of their country.

23. Silver doesn’t do very well in a deflationary super-crisis, as most of the silver community found out, the hard way. It couldn’t even rise above the 1980 highs, while gold soared. In a “stagflationary” crisis, which is likely to happen in the post-2015 period, silver could really shine. Please click here now or view below. That’s the monthly silver chart. I like to keep things simple (the KIS principle). Silver touched the lower Keltner demand line at the 2008 lows, and then staged a huge rally.  It recently touched that same Keltner line again. 24. Silver offers a lot of value at current prices, to investors who believe in my stagflation and cost-push inflation scenarios in the post 2015 timeframe. Having said that, this is not the same type of market situation that existed during the 2008 lows, and “parabola hunters” should look elsewhere. If you understand silver as an “ultimate asset”, and you can accept that Asian paper gold markets are set for massive growth, then perhaps today is the day that you press the buy button for silver, and hold your head high into 2015!