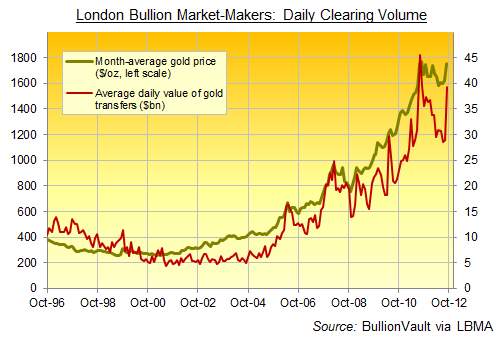 “The continued economic uncertainty in the Eurozone and US, the end of the holiday period and the start of the Indian festival season boosted clearing turnover,” says trade body the London Bullion Market Association, releasing the new data to members on Thursday.

But matched by a sharp rise in the size of gold-backed trust funds traded on the stock market (ETFs), these latest figures really suggest strong interest from hedge funds, investment banks and other institutions around the US Federal Reserve’s announcement of QE3, we believe.

Why QE3 as the catalyst? Because the so-called “smart money” had been hanging on Ben Bernanke’s every word all year…willing him to make free and easy with his electronic printing press once again. And why that group? Because the other potential buyers just weren’t so hot – buyers whose demand would have quickly registered back up the supply chain at the wholesale level – and certainly not hot enough to push Gold Trading through its world center in London to the third highest value on record. Jewelry suppliers in India have kept a lid on their stockpiling, even ahead of the annual peak in demand due with Diwali in mid-November. Private households (aka “retail” investors) raised their demand in September, but not dramatically, as Bullion Vault’s own Gold Investor Index shows. And amongst those central banks who declare their hand each month to the International Monetary Fund (ie, everyone but China), September 2012 saw them pretty much flat overall as a group.

So you have to guess, therefore, that the so-called “smart money” was the big buyer, helping drive the daily value of Gold Bullion traded through London’s 11 big market makers more than 35% higher in September from August to its highest level since summer 2011’s all-time peaks.

Those 11 market makers – led by global investment-bank and London vault operators HSBC and J.P.Morgan, and all guaranteeing to quote firm Gold Buying and selling prices throughout the day – shifted some $39.2 billion-worth of gold between them on average each day last month. Make a guess at all of September’s other Gold Trading done via smaller bullion banks and dealers, all still quoting prices for settlement in London’s secure and accredited vaults, and the total could have reached to $350bn. That’s the multple suggested by spring 2011’s market-wide survey, undertaken by the London Bullion Market Association on behalf of the World Gold Council.

The aim of that report, in which the LBMA surveyed all its members, was to gauge the true depth and liquidity of the physical gold market. The previous best guess-timate – of a multiple between 3 and 5 times the average daily turnover reported by the big 11 banks – now looks it should stand nearer 8 times. Especially when Gold Trading gets hot, as it clearly did in September.

Some of that hot money has turned tail since. This month’s pullback so far has taken Dollar-gold 4% lower to $1700 per ounce. Perhaps hedge funds, bank traders and other private institutions simply booked early profits off their September Gold Trading. Or perhaps they’re disappointed that QE3 didn’t instantly send inflation soaring.

Give it time. “There is a great deal of ruin in a nation,” as Adam Smith calmly replied when told in October 1777 that Britain was ruined by its defeat by the American rebels at Saratoga. It took another 170 years for the British Empire to crest and collapse. Today’s limitless zero-rate money won’t have long.

Adrian Ash runs the research desk at BullionVault, the physical gold and silver market for private investors online. Formerly head of editorial at London’s top publisher of private-investment advice, he was City correspondent for The Daily Reckoning from 2003 to 2008, and is now a regular contributor to many leading analysis sites including Forbes and a regular guest on BBC national and international radio and television news. Adrian’s views on the gold market have been sought by the Financial Times and Economistmagazine in London; CNBC, Bloomberg and TheStreet.com in New York; Germany’sDer Stern and FT Deutschland; Italy’s Il Sole 24 Ore, and many other respected finance publications.