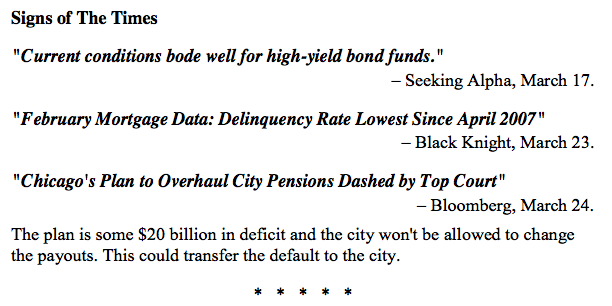 The Sensational Season seems to be improving. How much sensation is needed to become overdone?

Our target on the rally in stocks, commodities and junk has been for around March. As noted last week, equity sectors we cover had reached technical readings high enough to conclude that most of the expected move has been accomplished.

Base metal miners (XME) rallied from 11.33 in January to 21.48 last week. Outstanding enough to take money off the table. Trading between 19 and 21 since, taking out the 200- Day at 17.50 would turn a correction into the next phase of the decline.

The decline started in 2011 with exceptional momentum and real prices for metals having been unusually high for an unusually long time.

We don’t see anything that undoes the condition of too much capacity.

Since 2014, mining stocks fell to a quarter of the high. Oil stocks have fallen in half, which suggests too many investors are still positioning on Middle East problems. Until this capitulates, the longer-term outlook is not positive.

Retail (XRT) did well in accomplishing the best momentum in a couple of years. The rally started at 37.67 in January and has reached 46.50 this week. The last part of the rally has been sharp enough to register an Inverse Springboard, which could reverse the action.

Getting below the 200-Day would be negative.

Weaker sectors such as the banks (BKX) have been modest on the rebound. That’s despite the best action in spreads and the curve since the pressures started in June. BKX moved from 56 in February to 66 last week. Since the peak in July, this is the second test of the 20-Week exponential moving average.

If it fails it would be similar to 2008 when it followed the ema down. Seemingly forever. Broker-Dealers are in the same pattern and the chart follows.

This week, credit spreads seem to have stopped narrowing.

After the technically heralded peak at 400 in July, Biotech (IBB) sold off to the 240 level. The rebound was to 272 in early March. It has been around 257 since.

On the longer term, the rebound is the second attempt to get above the declining 20-Week ema. If it fails Biotechs have much further to fall.

Over the past year, the US dollar seems to building a base. This is noticeable on many declines ending at 30 on the Daily RSI. The basing level for the DX has been either side of the 95 level.

It could take more time in the basing pattern, but the next surprise will be to the upside. We hope not to be surprised.

This rally in the C$ seems to be topping.

Credit spreads have clocked the best run of narrowing since the pressures erupted last June. That’s when the CCC spread was trading at 9.50%. It reached its worst in the panic into February at 20.66%.

The long bond (TLT) seems poised to take another run at the 135 level.

Gold rallied from the depressed 1045 level in December to the high at 1287 earlier in the month. Essentially, a 23% rally against a 3% drop in the dollar. This has stimulated supply/demand researchers to discover shortages in supply as well as growing demand.

We have found that the only time it is really safe for fundamental research is at a distressed bottom for the sector. Such as in December. Other than in such conditions, supply/demand analysis is usually dangerous. Particularly, in silver.

Our policy is to consider that December was likely a cyclical low for gold stocks that would set up a cyclical bull driven by improving earnings. The latter would depend more upon improving operating margins than upon a soaring price in dollars.

The sector as charted by the HUI became the most overbought on the Weekly RSI in five years. The low was 99 and the high was 189 in the middle of the month. The 90 percent gain compares to the 23 percent gain in the bullion price.

A significant correction is needed and seems to have started.