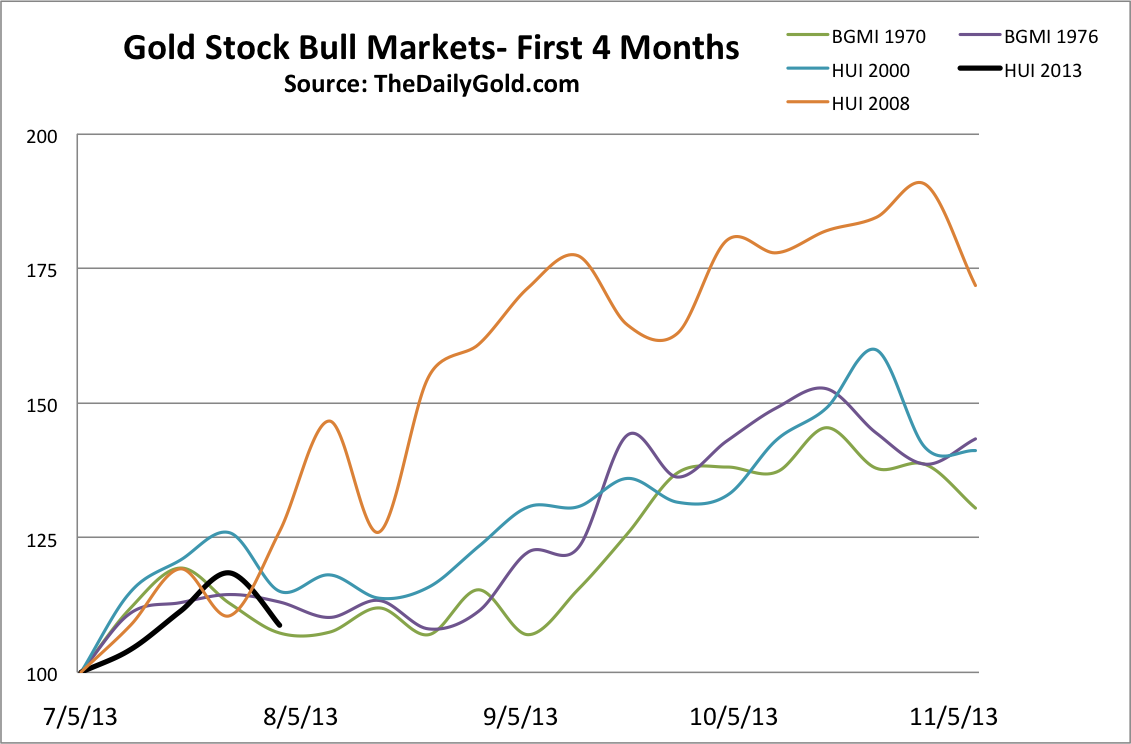 In our last editorial we presented the bulletproof evidence that the gold stocks had put in a major bottom. We included a historical chart that was supplemented by a major reversal at a Fibonacci strong target and on record weekly volume. At the end of that piece we noted that the sector could correct before it would accelerate to the upside. Looking at historical rallies from major bottoms we noticed that there tends to be a consolidation or correction around the 50-day moving average. The sector is two weeks into that correction. Don’t worry bulls, this is exactly what happens following the initial rebound.

The chart below shows the progression of gold stock recoveries in comparable periods (1970, 1976, 2000, 2008 and 2013). The current recovery is in black. Note that each recovery didn’t truly accelerate until after the middle of August. (That is using the current time scale). Thus, don’t be impatient. It could be a few more weeks before the sector begins its next leg higher. While it may take a few weeks for the next impulsive advance to begin, that doesn’t mean one should wait to participate. Gold stocks have declined for six consecutive days and are nearing what should be strong support at GDX $25. Take a look at the chart below. As far as Gold, its correction began when it reached $1350, which was formerly support. Gold is facing some trendline resistance as well as lateral resistance at $1350. If and when it breaks $1350 it will have very little resistance on the way to $1500. Gold should continue to consolidate for several more weeks. The big move will occur after it breaks $1350. In our last piece we concluded:

To conclude, the gold stocks are two weeks into their correction. These corrections or consolidations typically last four weeks. The gold stocks have declined six days in a row and are very close to what should be strong support at GDX $25. We could see a bounce over the next few days followed by a brief consolidation. For those who missed the initial rebound, now could be a great time to initiate or add to positions. If you’d be interested in our analysis on the companies poised to lead the next bull market, we invite you to learn more about our service.