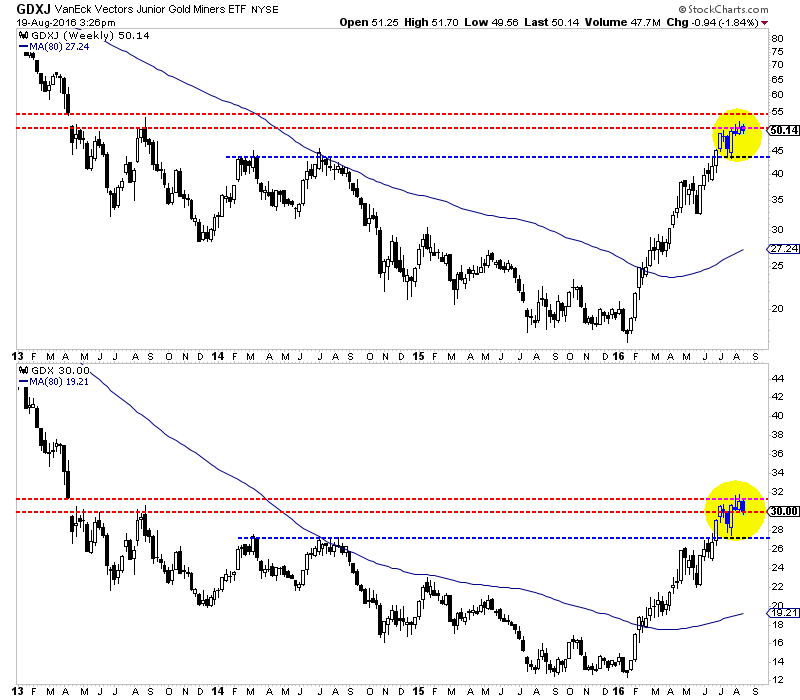 The gold stocks are trading around their highs but have failed to breakout this August. Is that due to the dog days of summer, the upcoming Fed conference or something else? We aren’t sure and don’t think it matters a great deal anyway. With that said, let’s delve into the current technicals.

The weekly candle charts of GDXJ (top) and GDX (below) are shown below. The miners have remained strong but are struggling to break higher here during the dog days of summer. GDXJ is set to close around $50 and GDX around $30. The weekly charts show strong support at GDXJ $44 and GDX $27. Call that about 10% lower. Let’s turn to the hourly chart which gives us a look at what to expect in the days ahead. We see that GDX (bottom) and GDXJ (top) have failed to break to new highs in recent days. Today the miners traded lower, confirming the failed breakout. The miners remain in good shape overall but could trade to lower levels next week. GDXJ has a confluence of support around $47 while GDX has good support at $28-$29. Overall, the current rebound in the miners remains well intact but susceptible to further short term weakness. It would not surprise me to see a 5% to 10% decline in the wake of the Fed conference. Judging from the broad strength in the charts and the litany of those looking for a correction (including those calling for one since February) my guess is the weakness will not last very long. Jordan Roy-Byrne, CMT, MFTA

related: How Will Brexit Impact the Gold Market? A Historical Perspective