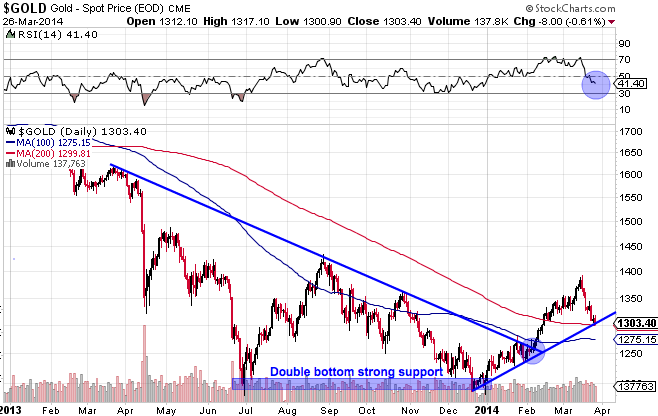 Gold and silver are testing key technical support levels this week. Some analysts have already flipped their outlook to bearish over the past few days, but I believe the uptrend remains intact as long as current support levels are not breached.

Goldman Sachs has predicted new lows for gold in 2014, but physical buying remains strong and precious metals represent a good safe haven during increasing political tensions worldwide. I also believe that precious metals are one of the only asset classes that remain undervalued at current levels. Stocks, real estate and just about everything else has climbed to unreasonable valuations by any number of measurements.

During late January, gold broke through resistance at the downward sloping trend line that had been in place for over year. This key breakout is circled in the chart below. A new uptrend support line was established starting in December and gold is now testing this support line at $1,300, also the 200-day moving average, for the second time.