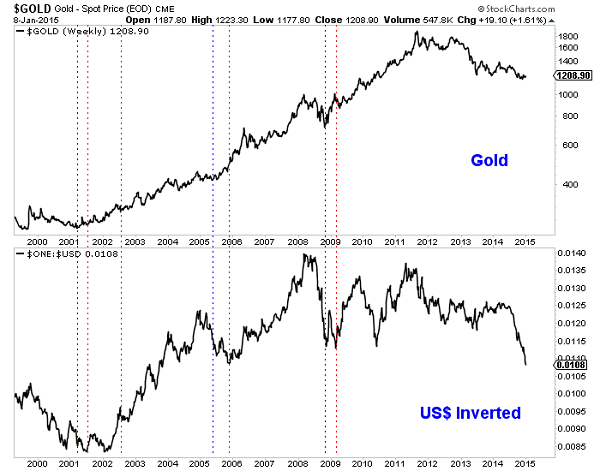 The current trendy reason for the mainstream to dislike Gold is strength in the US Dollar. On the surface it makes quite a bit of sense. Gold is priced in dollars. Dollar strength automatically pressures the Gold price. However, this popular view reveals a total lack of introspection. Since the end of 2013 Gold is essentially flat (positive by a fraction) while the greenback has gained a whopping 14.9%. Better yet, since Gold’s early November low it has gained 6.0% even while the US$ is up 5.8%. This type of relative strength within the context of an aging bear market may be another sign of a major trend change brewing under the surface.

Gold has a history of leading the buck at important lows. It makes sense because if Gold is going to rebound strongly it should do so in real terms and not just as a mirror of the buck. The chart below plots weekly line charts of Gold and an inverted US$ index. In blue we plot important bottoms in Gold with the corresponding bottoms in the inverted US$ in red. Note how Gold started to rebound at least a few months before the inverted US$. We should also note that during 1976 Gold bottomed in August while the US$ didn’t peak until December. Turning to the present, Gold is on the cusp of a mini breakout but we’d really like to see it show more strength against equities. We’ve recently noted that Gold has broken out to a 16-month high against foreign currencies and a 17-month high against commodities. Yet it has remained weak against global equities. Though Gold has been flat over the past three months it has quietly gained important relative strength. It recently touched a 16-month high against the Euro and a 17-month high against commodities. It has rallied even as the US$ has rallied. These are some very positive signs that hint that the worst could be over. In my opinion, the last thing Gold needs to do for bulls to win the argument is break its downtrend relative to the S&P 500. That negative correlation has killed Gold throughout the bear market and a reversal in favor of Gold would be very significant. We are long select juniors as we believe at worst, a decent rebound in the sector has begun. Time will tell if it evolves into a new bull market. Consider learning more about our premium service which includes a report on our top 10 juniors to buy for the coming bull market.