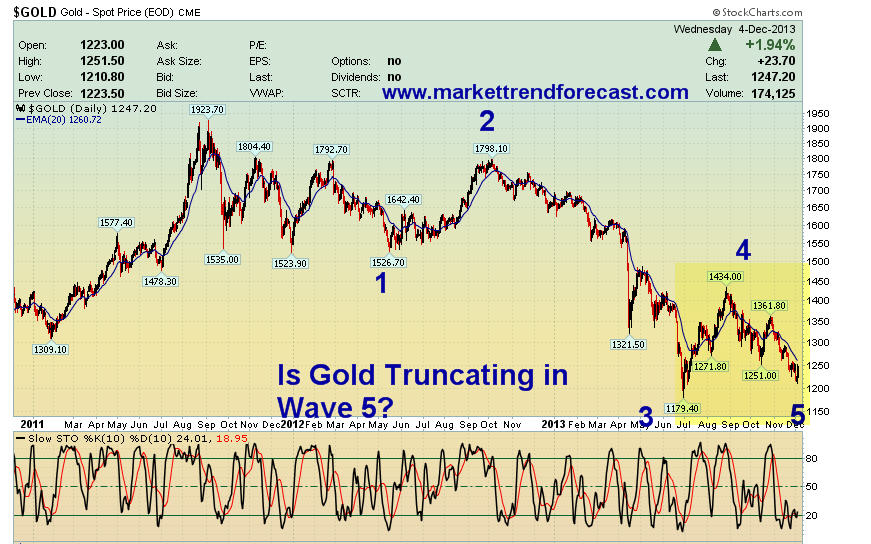 Most recently, we noted that we are seeing patterns commiserate with whatElliott Wave Theory calls a “truncated 5th wave” pattern. All bear cycles have 5 full waves to the downside from the highs, and we have been in wave 5 since the $1,434 highs.  The key then is determining how low that wave 5 will take you in Gold, and planning your investments and timing around that forecast.

To qualify for a truncated 5th wave, you have to have a very strong preceding 3rd wave to the downside. In this case, we had that as gold dropped from just over $1,800 per ounce to $1,181 into late June 2013.  Recently, gold hit a bottom at $1,211 spot pricing last week and that is when we began to consider a truncated 5th wave pattern.

We sent our clients about a week ago regarding this possible Elliott wave theory bottom: Aggressive investors should be accumulating quality small-cap gold producing and exploration, or gold itself depending on your preference during these last few weeks of December as our Elliott Wave Analysis is signaling a bottom is near. We would again watch $1,211 as a key level to hold for this possible truncated wave 5 to work out.

Producers that can pump at $60/bbl oil

Will Bernanke’s swan song include tapering?