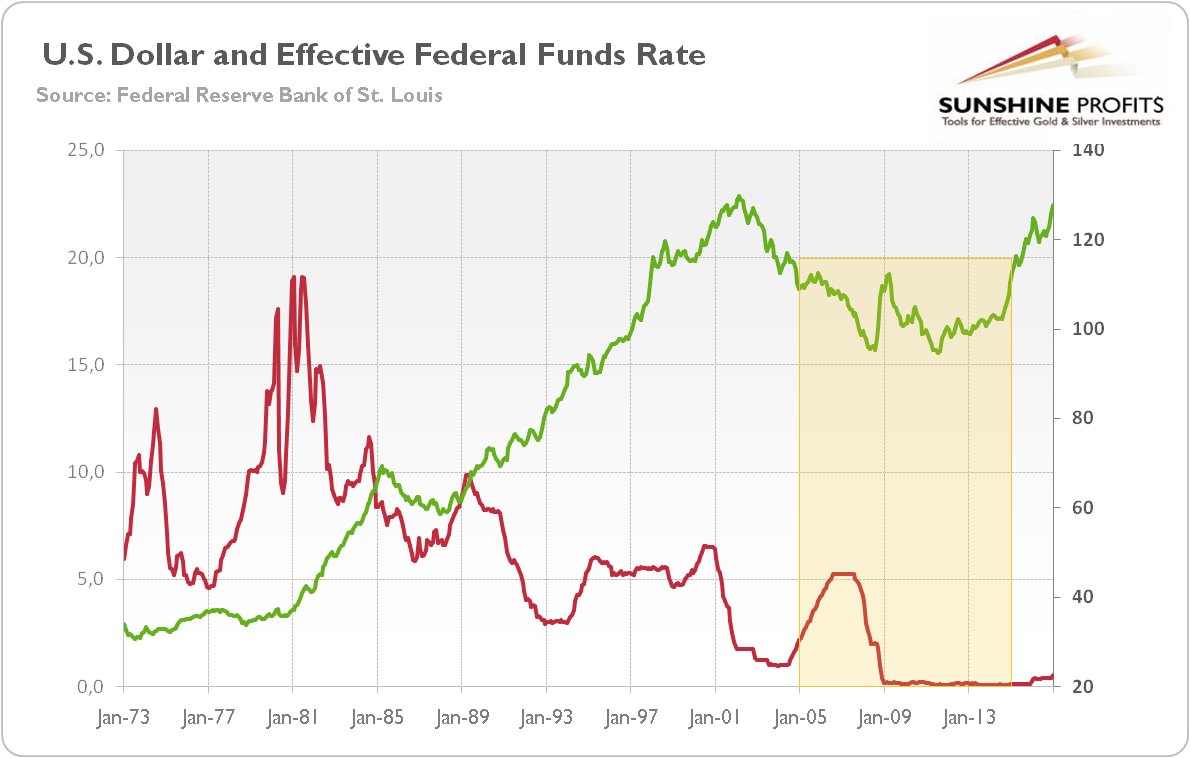 The narration of reflation and ‘Great Fiscal Rotation’ imply that the Fed will hike interest rates in a more aggressive way in a response to accelerated growth and higher inflation. We have already covered the Fed’s likely policy in 2017 in the previous edition of the Market Overview, but let’s discuss the impact of higher interest rates for the U.S. dollar and gold once again. It is widely believed that higher interest rates are bullish for greenback and bearish for the yellow metal. Is that really so? Some analysts do not agree with that opinion, pointing out that the U.S. dollar did not rally during Fed tightening cycles. Therefore, the hawkish Fed may be actually good for gold, they argue.

They are right, in some senses. Just look at the chart below: the tightening cycle which took place in 2004-2006 was actually bearish for the greenback and bullish for gold, while the U.S. dollar was essentially traded sideways during ZIRP. However, the three previous tightening cycles corresponded with the bullish dollar. Actually, the federal funds rate does not matter. As we have emphasized many times, what really counts for gold prices are the real interest rates, not the federal funds rate. The chart below illustrates that truth (we use the 1-year treasury yield adjusted for the CPI, since the yields at 10-year inflation-protected treasuries are available only since 2003).

It shows that there are many others important drivers of the greenback and gold than the federal funds rate. A lot depends on the broader macroeconomic situation in which the Fed acts. For example, the previous tightening cycle coincided with the bear market in the U.S. dollar, because the fiscal position of the country deteriorated. Moreover, in the past, the Fed actively determined the market conditions. Now, the U.S. central bank is data-dependent, so it is more passive or retroactive. Why does it matter? Well, the Fed hiked its interest rate in December 2016 after real interest rates actually surged. If the Fed is behind the curve and just follows the data, why should we look at the federal funds rate instead of the market interest rates? Investors look ahead and adjust to their expectations of the future developments, including the Fed’s moves.

So, let’s focus on the real interest rates. For the last 10 years, there was a really strong negative correlation between them and the price of gold, as the chart below shows. The correlation between real interest rates and silver or mining stocks is weaker, but still significant as one can see in the two charts below. The bottom line is that market interest rates are an important driver of U.S. dollar’s strength and, thus, gold. The Fed’s monetary policy is extremely important, as we constantly emphasize, but it affects the real economy through the market interest rates, as well as other channels (exchange rate, asset prices and so on). Therefore, gold investors should not examine only the federal funds rate, but always look at the broader macroeconomic picture.

And what does it all mean for the U.S. dollar and the gold market? Well, there is no rule how the greenback behaves during a Fed tightening cycle. However, if the U.S. economic growth accelerates compared to the euro area (and Japan), while the divergence in monetary policies conducted by the Fed and other major central banks continues (as a reminder, the Fed is likely to make a hike a few times this year, while the ECB and the BoJ will probably not move their interest rates upward, at least not in a similarly aggressive way), the U.S. dollar should strengthen further. As such, it will be a major fundamental headwind for the price of gold.

…also from Arkadiusz: Is Gold a Hedge against Trump’s Impeachment?