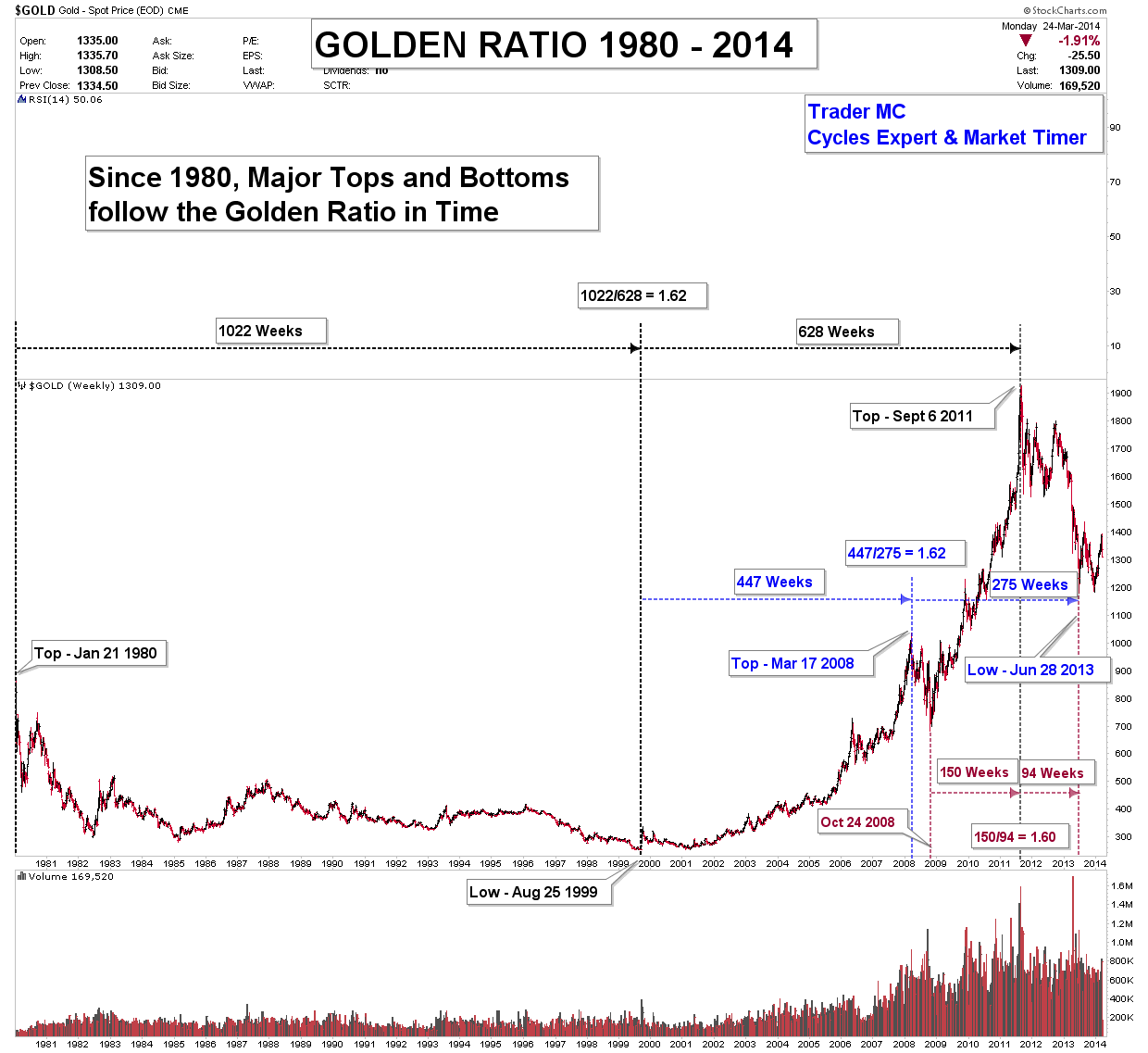 Gold Projection by the Golden Ratio

This article shows how Gold has been following the Golden Ratio which predicted all the major turning points with a high degree of accuracy for the past thirty years, and reveals the next possible major turning points. The Golden Ratio 1.618034… (also called the Golden Number, the Golden Section or the Golden Mean) can be found everywhere around us from mathematics to architecture, from nature to our own anatomy. But as you can see in the following analysis, it can also be found in the Gold Metal Charts.

Secondly, the first leg up of the Cyclical Bull Market from the low on August 25, 1999 to the top of March 17, 2008 predicted exactly the low on June 28, 2013. Here again, the Golden Ratio has an inverse correlation with the previous turning point (low-high-low). The next chart shows the Cyclical Bear Market from the 2011 top to the 2013 low. A look at the time duration of the tops and lows of this bear market reveals that it has an inverse correlation with the Golden Ratio. Contrary to the bull market, the bear market follows the 0.62 ratio which is the inverse of the Golden Ratio (1/1.618=0.62). We can also notice that the alternate relation between highs and lows is broken (high-low-low). (click image for larger view) As we can see, every turning point has been predicted by the Golden Ratio for the last thirty years. The charts are showing that these turning points did not happen by coincidence but followed a precise Golden Ratio road map. This ratio can therefore also be used to project the next important market turning points.

On the following charts you can see a projection upon studying the tops and lows of the previous bull and bear markets. The entire leg up of the Cyclical Bull Market from the low on August 25, 1999 to the top on September 6, 2011, is pinpointing an important market turn date during the last week of January 2019. The Correlation of Price is a little less accurate than the one for Time Duration but it is still very relevant. A measure move with round numbers of the first leg up and the second leg up of the Cyclical Bull Market presents that both legs up have a price ratio of 1.59 which is very close to 1.618. The two legs down of the bear market are also very close to the Golden Ratio (7 points less than 1.62). As all the major turning points were predicted by the Golden Ratio both in terms of Price and Time, we can also note that Gold Time Duration is well balanced. The second leg up of the bull market lasted three times less that the first leg up, whereas the second correction lasted three times longer than the first one. The dynamic symmetry is therefore completed. The geometry of Time Dimension has an important role in the market structure, as the market likes geometry both in Price and Time. The Golden Ratio has accurately predicted all the Gold major turning points these last thirty years and it seems reliable for making future projections. It is one of the techniques that can be used but the most important is to understand the structure and the rhythm of the market to forecast future developments not only in terms of the dimension of Price but also of the dimension of Time. Studying the history of the market is essential to bring superior returns.

Cycle Trader MC OU is not a registered investment firm or a financial institution. Any opinions, news, research, analyses, prices, or other information contained on this website and any messages sent from Tradermc.com and/or by Cycle Trader MC OU are prepared for informational and educational purposes only and do not in no means constitute investment, financial, legal or other advice. The content disclosed express personal opinion of the authors at the time of writing and is not a solicitation, or an offer to buy or sell any security, make financial transactions or use any particular trading system or to act in any other way. The information delivered is based on best research using data believed to be reliable, but there is no guarantee as to its accuracy and Cycle Trader MC OU shall bear no direct or indirect responsibility for any errors or omissions. From time to time, Cycle Trader MC OU and the owners and operators of Tradermc.com may hold positions in some or all or any of the securities mentioned, but are under no obligation to hold such positions. Cycle Trader MC OU will not accept liability for any loss or damage, including without limitation to, any loss of profit, which may arise directly or indirectly from use of or reliance on information delivered by Cycle Trader MC OU or third parties through use of Tradermc.com. The website and any of the messages will not provide readers with personally tailored advice concerning the nature, potential, value or suitability of any particular security, portfolio, transaction, investment strategy or other matter. By accessing or otherwise using this website, you are deemed to have read, understood and accepted this disclaimer.