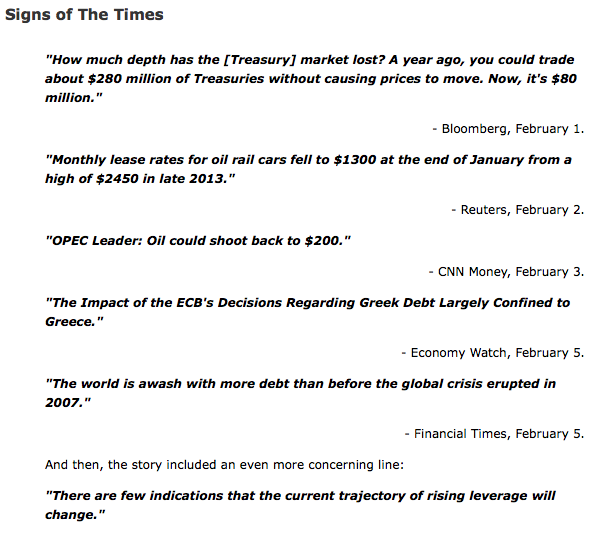 The last headline about “trajectory” prompts the vision of parabolic blow-offs. In this market this would definitely include loans bundled up to finance not just new cars on the “never-never” but also second-hand cars. Of course, the latter would not include good old “beaters” that always trade for cash or a couple of six packs.

In the magnificent bull market that completed in 2007, the outstanding frenzy was in new and second-hand houses.

Despite the obvious superiority of the focus of that mania it succumbed to the usual changes in the credit markets.

General weakness into January was prompted by the initial panic in crude oil, which low was likely to be found in January. This was based upon previous crashes for crude that ran for some 6 to 7 months. January was Month 7, when the decline might have maxed out. Easing of the pressures since has popped a rally in Junk, and this is correcting spread widening.

Which is helping stock markets.

In weaker currencies, it is the adjustment in intrinsic value. In the US it is the world playing the dollar and rising P/E multiples.

The following chart revisits NYSE margin debt and the S&P. Analyst Doug Short has updated his very good graphics. The pattern is that the amount of margin enthusiastically surges to a high and some time later the S&P peaks.

In this presentation the plot is of the differences between positive and negative credit balances. This reached the extreme in January 2000 and the highest Monthly Close in the S&P was set in August of that fateful year. The lead was 7 months.

In 2007, the extreme in employed (negative) credit was reached in June 2007 and the S&P high was set in October. The lead was 4 months.

This time around, the credit extreme was reached in July and on the Monthly basis the high for the S&P was set at 2094 in December. The lead counts out to 5 months, which number is becoming interesting.

Doug Short (www.dshort.com) deflates the series by the CPI and the S&P’s mighty effort has martched but not exceeded the peak reached in 2000. Deflated margin reached $380 billion then, and is at $410 billion on the December posting.

Stockwise, the Fed is not getting the “bang for the buck” that it got in 2000. Wonder if this relates to the old saw about it taking ever-increasing issuance of debt to get a unit of GDP growth.

Worth adding is that since 2011, it seems that even an infinite credit expansion would not have been unable to ramp up many commodity prices.

The truth of the matter, is that the success of speculative policy by the FMOC ultimately rests upon speculators in the private sector. And it is worth repeating that it’s the people around the world that decide which asset is to be ramped up. On the latter, the individual speculator has never had such encouragement from the establishment. It reminds of the Barrett-Jackson car auctions. Mainly American “collector” cars are dramatically presented and B-J has representatives (in nice blazers) standing in front of bidders and cheerleading them to keep raising their bids.

Not dignified – quite like central bankers Draghi and Yellen.

It is a privilege to be in the markets during such an extraordinary segment of financial history.

And just where is this history heading?

At some time, into the greatest mark down of wealth in history, which has always been consequent to massive inflation of credit.

In the meantime, the stock market continues to work on the big Rounding Top. Buyer excitement has registered sentiment and momentum numbers only seen at cyclical peaks. This marked the Enthusiasm phase, which has been followed by Divergence and Volatility. The sequence eventually discovers Resolution.

That will start when the NYSE Comp (NYA) decisively takes out some key markers. It has been trading either side of the 50-Week ma, which had provided key support since 2012. Staying under for a few weeks would show change.

Such a change would likely be associated with disappointment in earnings and/or in having to fix yet another problem de jour.

Change is what the establishment is trying to prevent. Cartoonist Chuck Jones created the coyote and his biography notes that when “Wile”discovered gravity, he always plunged for 18 film frames.

A little old-fashioned stuff going on recently. This business cycle is maturing and over the past few weeks long rates are increasing as junk rates decline. The long bond got overdone with the plunge in crude oil and – drum roll – Draghi’s announcement about actually buying Eurobonds. Junk rallied out of a Springboard Buy, and on a flight to risk.

Car sales and Consumer Confidence numbers have been soaring and Obama’s Gallup Approval reached 50 percent (highest since May 2013) at the end of January. Not to overlook an unbelievably good unemployment number at 5.6%.

How long will the confidence remain so lofty?

The bond future reached an exceptional high at 152 at the end of January. It also reached exceptional technical readings. Early in January we began the theme about an important “Ending Action”. Subsequent Chartworks outlined what was needed for an important top.

This represents serious technical damage, but it is temporarily oversold. A bounce seems likely.

Over in Europe, the bond-buying mania became very excited; on the expectation of the ECB finally figuring out how to implement the plan. Our question has been about just how much of this has been discounted by the market.

That’s on the overall market and we have been watching for a growing awareness that risk can’t be limited to just Russia, or more recently Greece.

Russian Ten-Year yields have been rising since 2013, due to self-inflicted problems. However, we can now consider that the rise since the low in February 2014 has been a leading event. That low was 9.85% and the high in January due to crude oil concerns was 14.39%.

It was a long time from Greece’s August low to the low for Spanish yields in January. This has reversed trend and charts follow. The same pattern holds for England, Italy and Portugal.

The German yield continues its decline to 0.317% earlier today. This in no way can be considered “reaching for yield”. Positioning must be mainly by highly speculative accounts. Should the trend continue to zero (0), would the note become currency?

We a watching to see if the trend change extends in the other issues. Perhaps after the Bond Future has a brief bounce.

The US Treasury curve corrected in January and flattening has resumed. The boom can run for some 12 to 16 months against a flattening curve. The “low” was in late November, which makes March the 14th month on the count.

Crude oil continues to work on the “Paradigm Shift”. This would be due to the usual post-bubble pressures on most commodities and in crude’s case, the lead provided by a similar “Shift” for natural gas prices.

On timing, once the price cracked we noted that severe bears for crude ran for 6 to 7 months. That counted out to January when we noted that a “pause” was possible. The low was 53.58 in late January.

There has been some wild swings within a possible period of stability. Also noted was that after a crash, it can take a number of months to set the base from which an intermediate rally would follow. The big swings could be due to aggressive traders expecting a “V” bottom when Mother Nature has something else in mind.

With this, natural gas has plunged to new lows for the move. The last high was 6.49 in February last year. This was driven by last winter’s unusually low temps. With a modest El Nino, this winter in North America is not as severe.

Natgas is somewhat oversold and could recover with crude.

Stable to rising energy prices would be a positive for junk bonds, other commodities as well as for the overall stock market.

There seems to be a few Paradigms in the air these days.

Both have 300 years of precedent, so there are no surprises.

They are opposite and this is important. During booms orthodox investments in stocks, junk and commodities go up and the real price, or purchasing power of gold goes down. This is within the pattern of booms and busts going back to the first financial mania – the South Sea Bubble of 1720.

It is a consistent record with gold’s real price generally declining during a long expansion and declining distinctively during a financial bubble. Then it turns up, starting a cyclical bull market against the initial post-bubble collapse.

One proxy for gold’s real price is our Gold/Commodities Index (GCI), which set a key low in May 2007 and in turning up signaled the beginning of the financial collapse that was “discovered” in early 2008.

Going the other way, the GCI set its cyclical high in February 2009 and in turning down signaled the end of that collapse.

In November we were not looking for a “V” bottom. We were looking for a “precarious” bottoming process with some guidelines. This would have gold shares beginning to outperform the bullion price and silver outperforming gold.

This has been working out and while the advice has been to accumulate on weakness, we are not fully invested.