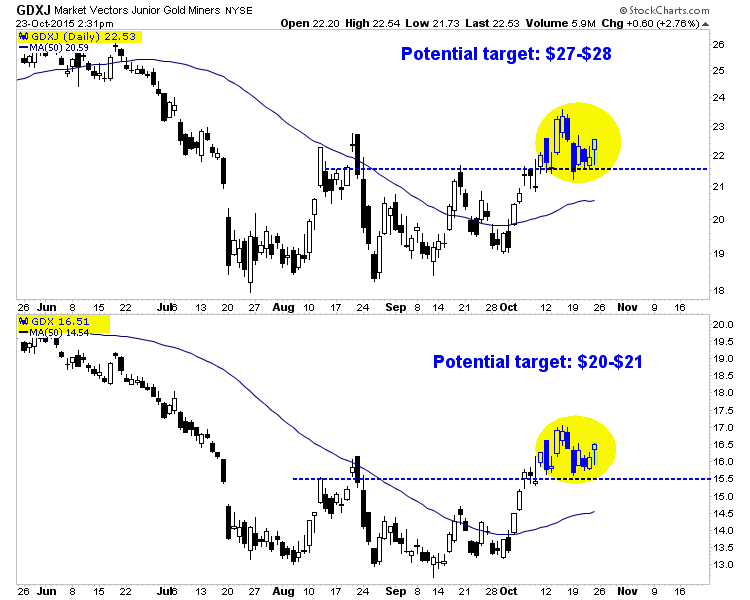 We published a video update a few days ago discussing the short-term outlook for the precious metals sector which includes the gold miners. With regards to the miners, we took the view that they could digest recent gains and hold support or break lower and trade close to the support near summer lows. After this week and today especially, one scenario is more likely.

We plot the daily candle charts of GDXJ and GDX below. There are numerous bullish points to make. First, the miners tested and held above support in each of the past five days. That culminated with a strong intraday reversal today (Friday). Second, the miners held above their 38% retracements which indicates they are holding most of their recent gains. Third, the miners will close today above their late August peaks. Fourth, the miners have held gains in the face of a very strong US Dollar. The miners have formed potential cup and handle patterns with the handle depicted in yellow (above). The potential upside targets are $27-$28 for GDXJ and $20-$21 for GDX. These targets are possible and would become probable should the miners break above their 200-day moving averages at $17.82 for GDX and $23.52 for GDXJ. The miners’ holding of support for five consecutive days in the face of a surging US$ and a lack of strength in metals prices has increased the odds of the bullish scenario playing out. After enduring a devastating bear market the miners should be ripe for a recovery at some point. Need we mention that the gold stocks have been in their worst bear market ever and second longest? Need we mention that senior miners have been in a bear market for almost five years while junior miners have been in a bear market for four and a half years? The near term outlook looks bullish and if that plays out one would have to think a major long-term turn was at hand.

As we navigate the end of this bear market, consider learning more about our premium service including our favorite junior miners which we expect to outperform into 2016.