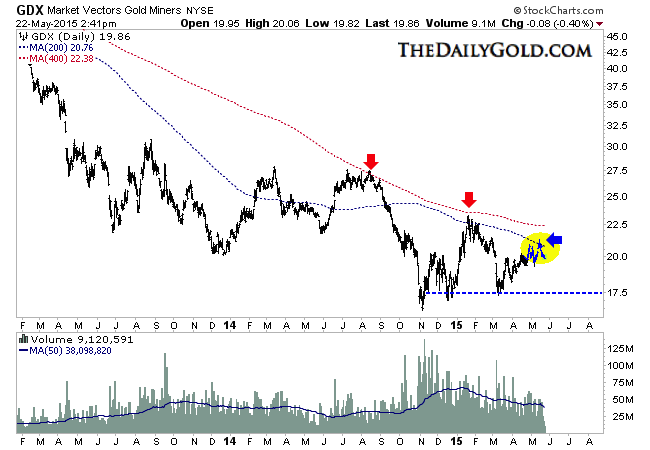 Last week we wrote that the precious metals complex had not broken out yet and had more work to do before it could attempt a true breakout. The metals had some more upside and so did the shares. However, the poor performance of the shares this past week could warn of a larger reversal. The weakness in the shares is a warning sign for the entire complex and could also be a signal that the metals have not bottomed yet. Over the past eight months Gold and Silver have essentially traded in a tight range (except for several weeks). Gold has spent most of that period between $1150 and $1225 while Silver has spent most of that time between $15.50 and $17.50. The metals’ failure to extend recent strength could signal a move down to the bottom of those ranges and threaten a breakdown. Last week we noted that gold miners would only truly breakout (above their 80-week moving averages) if metals were to surpass their January highs.

I’m skeptical metals will do that on this rebound as their relative performance is weak considering the big drop in the US$. The worst is likely over for the miners but if Gold can’t reach or takeout its January high then the miners are at risk for remaining in the range they have been in for the past eight months. Until something changes, buying support and oversold conditions works better than chasing strength.

GDX has 12% downside to strong support and 17% downside to its daily low. Be patient and use support to your advantage. If metals are heading to new lows then it would likely create one last chance to buy miners at fire sale prices. Consider learning more about our premium service including our current favorite junior miners which we expect to outperform in the second half of 2015.