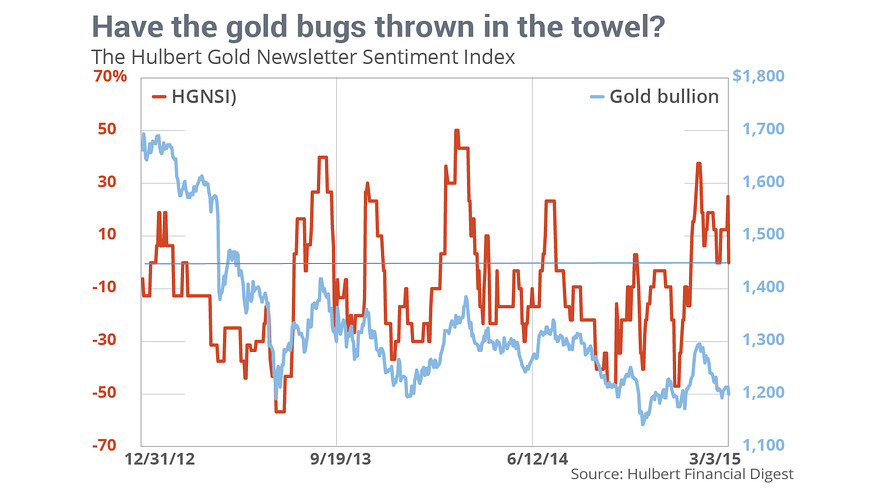 Sentiment for the yellow metal is very weak CHAPEL HILL, NC (MarketWatch) — The gold-market timers I track aren’t exhibiting the extreme pessimism and despair that is the hallmark of a bottom in prices, despite a dismal six-week period for the yellow metal.

Nevertheless, the average recommended exposure among gold timers I monitor is nowhere near as low as where it was during those December lows. And that’s not a good sign, according to contrarian analysis.

The current average recommended exposure level (as represented by the Hulbert Gold Newsletter Sentiment Index, or HGNSI) stands at 0% — indicating that the average gold timer monitored by the Hulbert Financial Digest is completely in cash. At the late-December lows, in contrast, the HGNSI stood at minus 46.9%, which meant that, at that time, the average gold timer was allocating nearly half of his gold-trading portfolio to going short, betting on a decline.

That represented a very aggressive bet that gold was headed lower, and in true contrarian fashion, the gold market quickly responded by rallying: Bullion rose by more than $100 an ounce over the following four weeks.

Unfortunately, as you can see from the accompanying chart, the HGNSI is a lot higher today than in late December. As a result, the current gold market rests on a markedly weaker foundation of sentiment than it did then.

What’s it going to take to create that strong foundation? Contrarians typically don’t speculate. It could happen quickly if many gold timers decide in coming sessions to throw in the towel. It would take longer if the gold timers stubbornly stick on to their relative bullishness.

In the meantime, don’t forget that contrarian analysis applies primarily to the short term, and thus sheds little light on gold’s longer-term prospects. Gold could easily be much higher at the end of this year, for example. But, if so, and if contrarian analysis is right, bullions’s path to that higher level will take it lower first.

Click here to inquire about subscriptions to the Hulbert Sentiment Indexes.