Gold: Getting There A Little At A Time 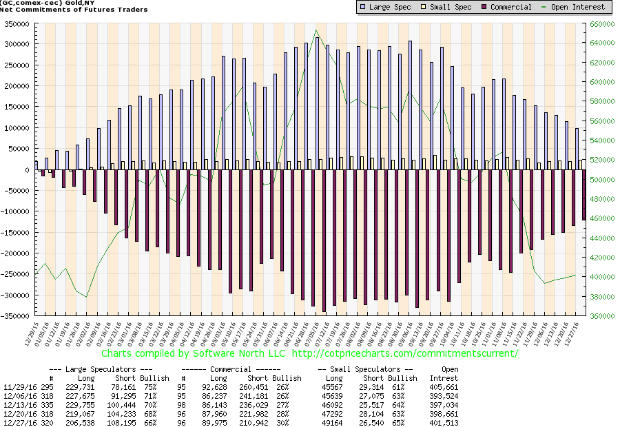 One of life’s hardest-to-learn but most necessary lessons is that things usually take a lot longer to work out than you’d like them to.

That’s where the sayings “Being too early is the same thing as being wrong” and “The market can stay irrational longer than you can stay solvent” come from.

A current case in point is gold. After the metal’s decade-long bull market, a correction was inevitable. But when it finally came, rather than being short and cathartic it was long and grinding, stretching from 2012 through 2015 and causing many who got back in prematurely to eventually walk away in disgust.

Then, after a nice pop in the first half of 2016, came the current long, slow-mo correction that’s fraying the nerves of remaining gold-bugs.

This latest correction may not be over, but — based on the Commitment of Traders Report (COT) – the bottom is getting closer. For previous posts on this subject, see here and here.

The COT gives a snapshot of what the big players in the “paper gold” market are up to. On the following chart the gray bars represent long positions held by speculators such as hedge funds, and the red bars denote net short positions held by “commercial” players like fabricators and big banks. The speculators are usually wrong at major turning points, so when they’re extremely long, gold usually falls and vice versa. The commercials tend to take the other side of speculators’ bets, and so are generally right at the big turns.

At the beginning of 2016, the speculators were hyper-pessimistic, as represented by a net long position of more or less zero. Gold then rose for six straight months. By July the speculators were overexcited – and overextended — setting the stage for the correction that’s been grinding along ever since. Now the two positions – speculator net longs and commercial net shorts – are once again converging. They’ve yet to meet in the middle, but another couple of months on the current trajectory and they will. So the stage being is set for another positive stretch in gold/silver prices, and by implication precious metals mining stocks.

For a sense of what that means for the miners, the price chart of GDX, a major gold miner ETF, is instructive. After getting absolutely crushed during the last four months of the previously-mentioned multi-year bear market, it took off in January of 2016, rising by about 150% in six months. Since then it has given back about half its gains. Assuming that 2015’s plunge was the result of a ridiculously long bear market causing most investors to capitulate — something unlikely to happen in the current, milder correction — then another month or two of gold price weakness might send mining stocks like GDX lower, but probably not all the way back their January ’16 bottom. So the entry point this time around is somewhere between today’s price and the prior year’s low. Let’s call $17 a reasonable target.