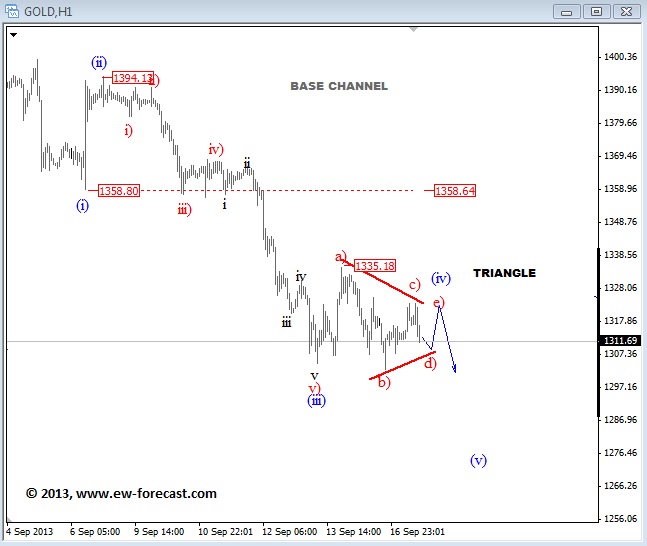 GOLD has turned bearish last week and made a sharp decline towards 1300 with a personality of an impulsive price action; strong and large move in the short period of time. As such, we believe that metal is in a new bearish period which could bring price even back to June lows. We will be looking lower as long as 1434 is in place. With that said, to take advantage of the current down move it’s important to keep an eye on intra-day wave patterns and any evidences of a corrective or contra-trend patterns that will give you an opportunity to join the trend.

Well, on the hourly we see a sideways movement in tight range which is a very important guideline for a correction, or temporary pause within downtrend. From an Elliott Wave perspective we see current pause as a triangle which is a continuation pattern, most likely placed in wave four. As such, we anticipate trust out of a triangle into wave (v) that could reach levels around 1280 in the next 24-48 hours once 1300 support is taken out. A Triangle is a common 5 wave pattern labeled A-B-C-D-E that moves counter-trend and is corrective in nature. Triangles move within two channel lines drawn from waves A to C, and from waves B to D. A Triangle is either contracting or expanding depending on whether the channel lines are converging or expanding. Triangles are overlapping five wave affairs that subdivide 3-3-3-3-3.

Gregor is based in Slovenia and has been in Forex market since 2003. Most of the charts that you can find on the website is his work. His approach to the markets is mainly technical. He uses a lot of different methods when analyzing the markets; from candlestick patterns, MA, technical indicators etc. His specialty however is Elliott Wave Theory which could be very helpful especially if you know how to use it in combination with other useful tools.