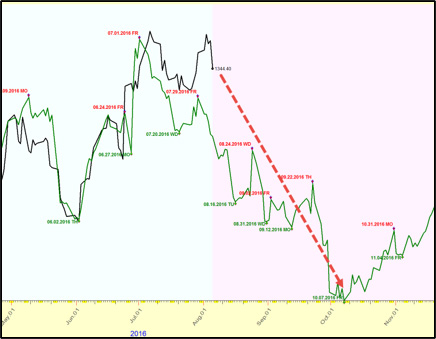 Despite all the bullishness about gold and silver and the mining industry, I’ve maintained for quite some time the view that this first leg up will be dramatically retraced with a crash heading into October.

To say I’ve become unpopular because of my view would be an understatement.  Every gold bug and analyst I know is more bullish than ever.

And according to the Commitment of Traders (COT) reports from the Commodity Futures Trading Commission (CFTC) — bullish sentiment in the precious metals is at record highs. That typically means that the slightest fright could set off an avalanche of selling in the gold and silver markets. The fact that gold — despite many attempts — has been unable to close above $1,363.50 on a weekly closing basis indicates that’s the roof and support still lives at the $1,320 level.

More importantly, gold is following the AI models to the tee.

Look, I am as bullish long-term as anyone is. But no bull market goes straight up.  Strong long-term bull markets stair-step higher, taking one step up — then pulling back 50-65% — then taking another step higher. This is what you want to see.

It’s also why I’ve been steadfast and refused to jump on a wave with the majority of bullish gold and silver surfers who are about to be thrown off the wave’s crest and even worse, get smashed amongst the coral or the rocks below.

Stalking the precious metals is what I have recommended, and I’m convinced it is the right strategy — because even some of my most loyal followers have wanted my head over the last several weeks …

Proving to me that the majority are going to get caught as the wave turns down and lose or give back a majority of their “lucky” gains as they typically do.

Same for the mining sector. It had its first leg up and now it needs to pull back and refresh. So keep your eyes on gold and silver. As long as gold is unable to close above $1,363.50 on a Friday closing basis — October futures contract — then gold should follow the path seen in the AI forecast chart above into a low in early October. That low should come in around $1,250 – $1,275.

Assuming that’s the course of action and major support holds, I’ll be screaming from the rooftops to buy gold, silver and select mining companies.

So what should you do if you haven’t listened to me or if you followed one of the hundreds of analysts who refused to do anything but be bullish and promote precious metals and miners with reckless abandon?

If it were me, I would hedge my holdings with inverse ETFs. For gold I would consider ProShares UltraShort Gold, symbol GLL.  For silver I would consider ProShares UltraShort Silver ETF, symbol ZSL. Careful though, this is a double-leveraged ETF, seeking to deliver twice (2x or 200%) the inverse (or opposite) return of the daily performance of silver bullion in U.S. dollars.

And for mining shares, I would consider Direxion Daily Gold Miners Index Bear 3x Shares ETF, symbol DUST. Carefully here too, as DUST is a triple-leveraged ETF, seeking to deliver three-times (or 300%) the inverse (or opposite) return of the daily performance of the NYSE Arca Gold Miners Index in U.S. dollars.

Meanwhile, the U.S. stock markets continue to struggle, with the majority of stocks deep in the red for the year and with only a handful keeping the Dow Industrials and the S&P 500 at record highs. It won’t last.

Yes, long term, the stock market is headed to Dow 31,000. But that does not mean — like gold and silver — that a sharp, sudden decline can’t occur. It will.

If you’re loaded up with stocks and it were me, I would consider hedging with an inverse ETF such as ProShares Short S&P500 ETF, symbol SH.

These are mere suggestions. Members of my newsletter and trading services of course get specific recommendations, timing, buy prices and sell prices.

Lastly, keep your eye on crude oil. There should be one more decline before its new bull market really starts to take off.