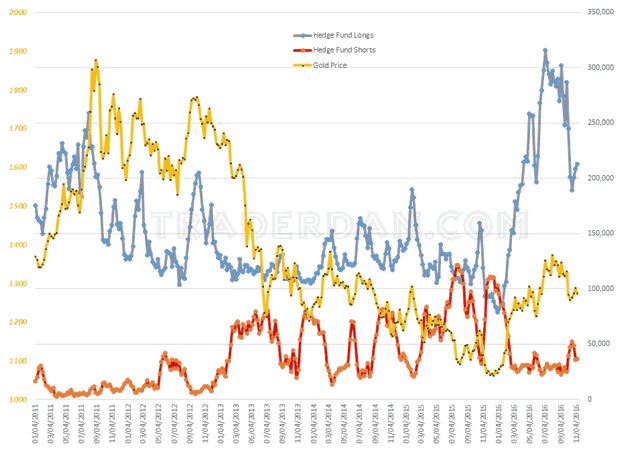 Hedge funds were actually busy adding more longs and covering shorts over the past week’s reporting period. As soon as those downside support levels were taken out after the election results were digested, gold bulls were getting mauled in a big way.

As you can see, every single speculative category remains net long as of last Tuesday. A great number of those longs are either underwater or have already been liquidated.

I am more anxious to see this coming Friday’s report to be honest as that will contain the positioning changes AFTER the election; that is what will be most important. Suffice to it say that an awful lot of people bet on the wrong direction for a gold move and they are now paying the price.

Additionally, we had yet another drop in reported gold holdings in GLD this afternoon.

The last three trading days have seen GLD disgorging more than 30 tons of gold! Holdings are back at levels last seen in June of this year.

Based on what I can now see taking place in GLD, rallies in gold are going to be sold. Western-based investors are getting out and are moving into equities ahead of next year.

Since the metal has dropped so far, so quickly, I would not be surprised to see a bit of a bounce down here especially now that it has been able to hold initial support levels above $1200 but there are a myriad of gold negative fundamentals now in place. China and India can probably offer it some downside support but as far as any sort of sustained rallies go, there is nothing that I can see at this juncture which would lead me to believe that is likely, especially with the US Dollar moving the way it is.

By the way, those calling for hyperinflation and gold prices in the stratosphere as a result had best come up with a intelligent explanation as to why the US Dollar is going to fall apart in an environment in which the US is the only major Western industrialized nation where interest rates are rising and where growth prospects look the best.

I think one can easily make the case that if a Trump administration brings in with it a real stimulus program, such as the infrastructure plan I see being discussed, along with regulatory reform, US growth prospects are going to be looking rather good. That by itself could very well induce the Fed to move interest rates higher at a FASTER PACE than the market initially envisioned in order to nip off any nascent inflationary pressures. Such a development would bring even more support into the US Dollar.

By the way, as a sort of side note to this.. look at how quickly hedge funds have going from a net short position in copper to a net long one! And most of this took place AHEAD of the election results! Yikes!