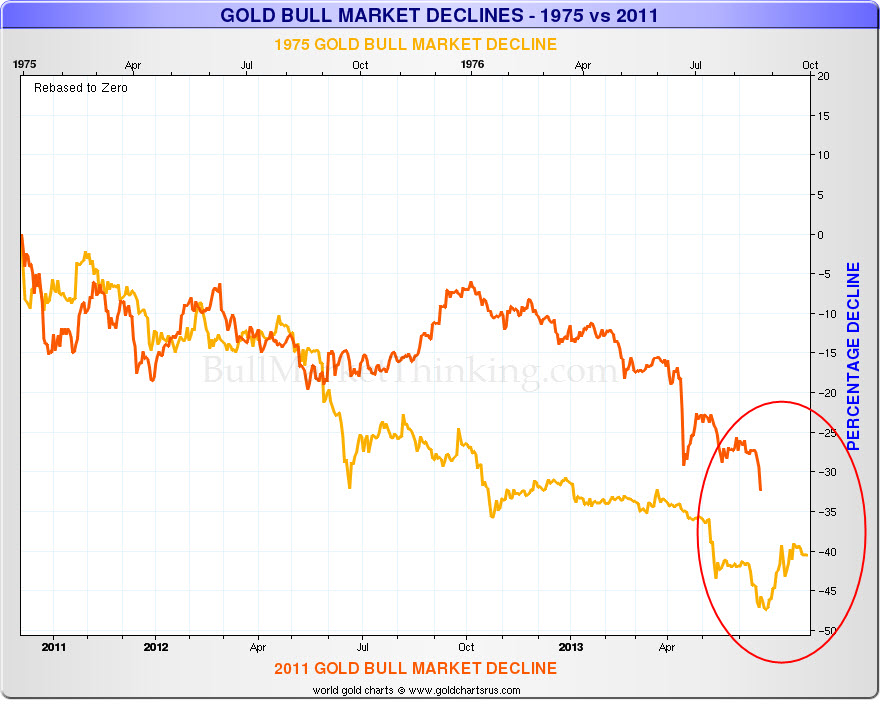 A “Pure Giveaway” At The Time According To Billionaire Entrepreneur.

As articulated here on Wednesday, gold is now approaching the 1976 bottom in terms of total percentage decline from its most recent top.

Following the FOMC-inspired decline of the last two days, we are now another 6% closer to that bottom: The 1976 mid-cycle bear market in gold provides us with recent precedent of gold dropping by 48% in the middle of a bull market—only to rally by 900%+ once smart money fully re-positions itself.

It appears that re-positioning has been occurring all year long. Self-made Canadian billionaire and head of Dundee Corporation, Ned Goodman, recently notedthat, “[Gold] is under siege today and maximum pessimism is being delivered in the midst of a very long term secular bull market…not unlike the early days of the 1970s when gold at $100 an ounce was a pure giveaway. Prices have been created by false and manufactured pessimism…[and] we can expect unbelievable opportunity for significant gains. The overall market for gold is still in a bull market but the current situation is acting like a bear market. As John Templeton said, ‘Buy at maximum pessimism’.”

Indeed we are at an important crossroads. Gold is either gearing up for a,“seismic move upwards,” as Goodman further commented, or the“grandiose monetary experiment…[which] is unprecedented in recorded financial history,” will have worked (ie. printing grow into infinity, absent of inflation).

Only time will tell.