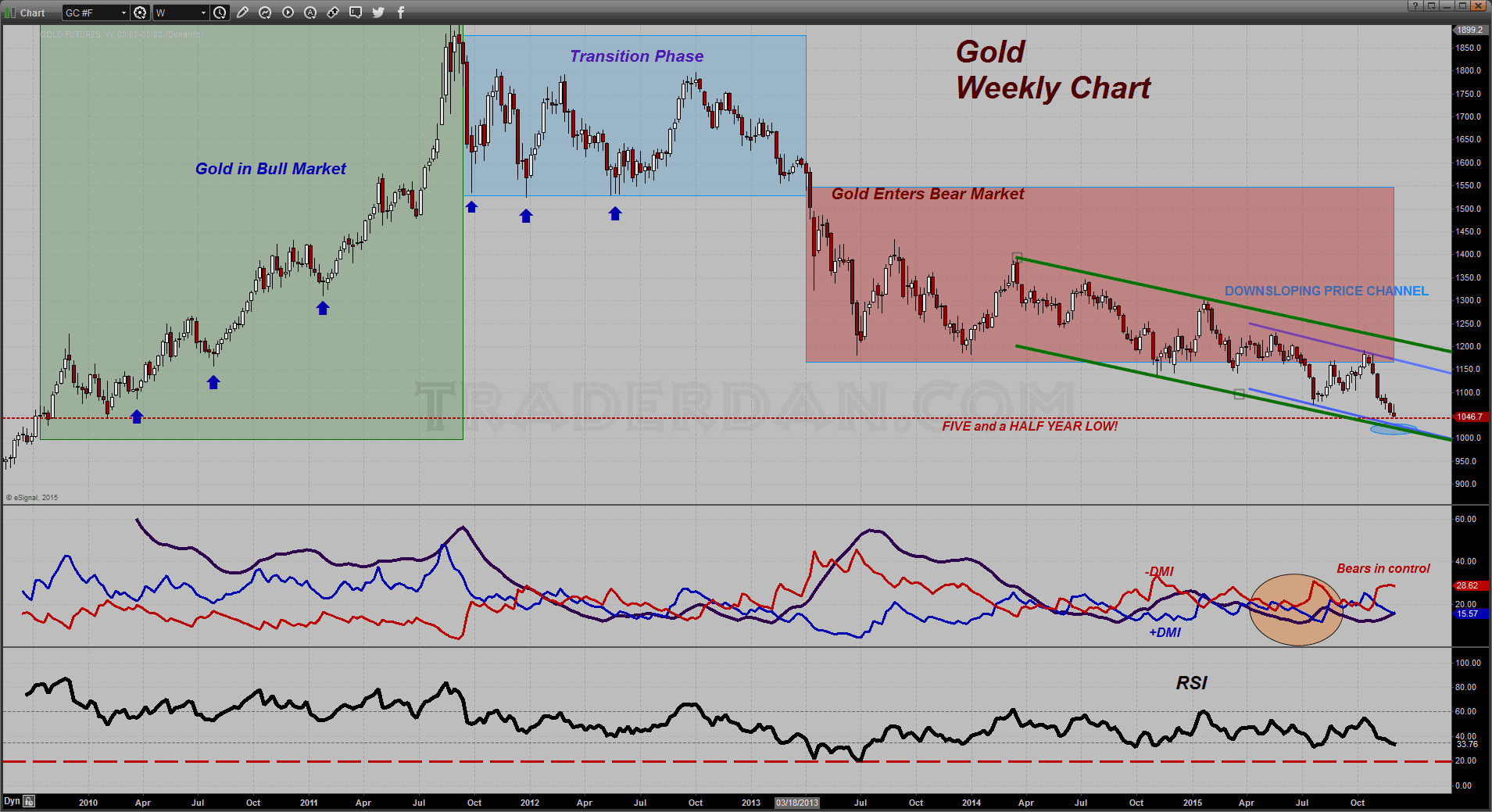 The technical charts on gold are suggesting the start of a fresh leg lower in price. The loss of chart support near the $1075-$1070 level, and the subsequent inability of the metal to move back above that level, has led to both long liquidation on the part of the specs as well as fresh shorting.

On the intermediate term chart ( Weekly) price appears headed for the lower line of the downtrending price channel that has contained gold since April of 2014. Currently, that targets a potential move to down near $1030-$1020. As noted in a previous post detailing this weekly chart, the metal has actually formed a new and steeper downtrending channel since March/April of this year.

I should also note here that while the RSI is now approaching the threshold level of being oversold at 30, this indicator has fallen as low as 20 during the April-July 2013 time frame.

This market is now completely at the mercy of the US Dollar and by consequence, the Euro. Anything that tends to further strengthen the Dollar, especially at the expense of the Euro, will cause an acceleration lower in the gold price. That means all eyes are going to be on the ECB tomorrow and on the US payrolls number this coming Friday morning.

by the way, here is an updated chart showing yet another large drawdown in reported gold holdings for the gold ETF, GLD. There were 16 tons of gold dumped this time around bringing the total number of tons sold since the beginning of the year in this ETF to a whopping 70 tons! There is no doubt whatsoever that Western-based investors are fleeing gold in droves at this point.

I might add that those who keep yapping about “capitulation” are completely missing the point. There is no “capitulation” until people STOP LOOKING FOR a REASON TO BUY GOLD. The gold oriented sites continue to stay married to their yellow metal god no matter how far it drops. As long as they keep doing this, there is no capitulation. Capitulation occurs when the last of the die hard bulls finally throw in the towel. We are a long way from that taking place based on the attitude that is so manifest on these gold sites and among the gold cult.

When the gold cult finally “lose their faith” and snap back to reality and have stopped drinking the grape Kool-Aid, maybe then we will see a final bottom in the metal. Even that however, does not guarantee an immediate transition to a new bull market. What is far more likely is a period of protracted weakness in which gold sits and does nothing with the remnant gradually abandoning all hope of ever recovering the huge sums of wealth that they have lost in the metal. A languishing price, a lack of interest and disgusted gold investors will then pave the way for the next bull market to unfold at some point in the future when the conditions are once again ripe for the metal to rise.

This is the reason I have repeatedly said that one can tell if they are emotionally involved with an investment if they are looking at the price every single day, day in and day out waiting, hoping, praying, begging, etc., for the price to go up. Once you find yourself in such a predicament, you are no longer an objective investor/trader. You have violated the number one rule of successful investor by allowing yourself to become psychologically joined to a mindless asset class.

What is so tragic about all of this is that many of the people who were hoodwinked by the gold gurus and the various gold-oriented websites and newsletter writers and who “backed up the truck and loaded it up” are now too old to ever have a realistic chance of recovering from their massive losses. These are those who were buying gold back when it was $1900 citing all the same reasons to keep buying more of it or not selling any of it that they were citing back then. Some of these poor victims are in the 60’s, 70’s or even their 80’s. What are they supposed to do now that they have been left devastated by the gold hucksters?

You know what I mean: “Gold is honest money and paper fiat is just paper so stick all of your wealth in the real thing”.

Or how about – “stand firm and stay strong and console yourself with the knowledge that the rest who ran and sold their gold are economic cowards. You who held fast are however to be commended, especially by your gold guru who could care less about the ruin he is causing you, because you have kept the faith.”

Or how about this one: ” the gold cartel is nothing but a group of evil banksters who are out to financially rape you so do not give them the satisfaction of selling your gold and allowing them to separate you from the only thing that will be a safe haven when the economic system collapses and Mad Max days arise”. We could go on and on and on. You get the point.

Perhaps if there are any of the younger crowd who have been plundered by these people, they might have a chance, given enough time and years, to recover some of their losses. That is unclear. What is clear however is that there is a lesson to be learned here – One that should be unforgettable for all those who want to learn how to avoid one of the snares of investing. NEVER, NEVER, NEVER put your confidence, and by consequence your precious and hard-earned wealth, in an individual(s) and allow them to make a captive of your objectivity. RESPECT the price action. Investments that do not perform well and which break down on the price charts, should be sold at the breakdown point in an attempt to minimize losses. CUT YOUR LOSSES short and let your profits run is the axiom to follow, not some pestilential gold guru.

Dan Norcini is a professional off-the-floor commodities trader bringing more than 25 years experience in the markets to provide a trader’s insight and commentary on the day’s price action. His editorial contributions and supporting technical analysis charts cover a broad range of tradable entities including the precious metals and foreign exchange markets as well as the broader commodity world including the grain and livestock markets. He is a frequent contributor to both Reuters and Dow Jones as a market analyst for the livestock sector and can be on occasion be found as a source in the Wall Street Journal’s commodities section. Trader Dan has also been a regular contributor in the past at Jim Sinclair’s JS Mineset and King News World as well as may other Precious Metals oriented websites.