Posted by Jim Rogers via Kitco 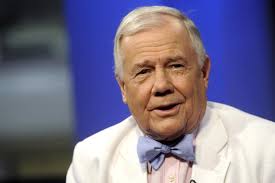 “Gold has its own mind,” Jim Rogers says. “Sometimes it moves with the dollar, sometimes it doesn’t.”

Rogers says he’s not so concerned with the daily fluctuations and adds he is still waiting on a buying opportunity.

Looking east, Rogers says he is bullish on the Chinese economy despite recent weaker economic data and continued easing in the country. “I’m bullish on the Chinese markets. My largest stock positions are in Asia – China, Japan, Russia,” he says. “I see more real estate bankruptcies in China, there’s a lot of debt buildup in China. But at the moment, I’m still there and I even bought more last week.”

Rogers also has a keen interest in the Russian stock market. Tune in now to get his thoughts on the Federal Reserve and why he thinks they may not even raise interest rates this year.