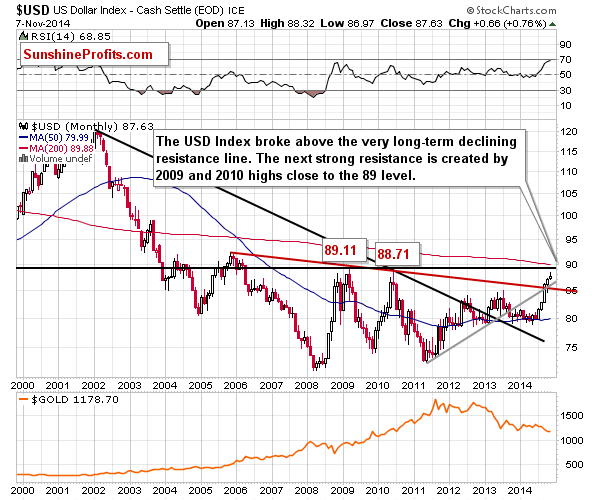 Ed Note: After being short into the Oct 6th Gold bottom, successfully trading long into the Oct 21st rally top, then extremely profitable short into the Nov 7th lows (stopped out on friday’s bounce), this gentleman is worth reading – Robert Zurrer for Moneytalks

Briefly: In our opinion no speculative positions are currently justified from the risk/reward perspective. In other words, closing short positions and taking profits off the table seems justified.

Much happened on Friday in gold and mining stocks and the key question is this: does this strength prove that the bottom is in? Our take is that it suggests that “a bottom” might be in, but “the bottom” is likely still ahead of us.

Let’s take a look at the charts, starting with the USD Index (charts courtesy of http://stockcharts.com). On Friday we wrote the following:

The above hasn’t changed even though the USD Index declined a bit on Friday. It didn’t reach an important resistance level before Friday’s decline and the move above the previous 2014 high is confirmed. Consequently, it’s likely that the rally will continue until the USD Index reaches at least the 2010 high, and more likely the 2009 high.

This gives us significant room for a further rally – and a further decline in gold. On Friday, however, gold moved higher on strong volume, which is a bullish sign. Gold didn’t manage to close the week above the 2013 low, so the breakdown below it was not invalidated – which in turn is a bearish sign. Moreover, gold corrected to the 38.2% Fibonacci retracement, which means 2 things. Firstly, the current move is still down – until we see a move above the 61.8% retracement the rally will be a correction, not necessarily a beginning of a bigger upswing, and gold hasn’t even moved above the lower retracement of 38.2%. Secondly, the rally could be already over as the resistance was reached.

Overall, gold’s price/volume action that we saw on Friday was less bullish than it seemed to be. Still, the short-term situation is now more bullish than it was before Friday’s session. In the case of the gold to USD Index ratio, we see that the breakdown below the 2013 low was definitely not invalidated, but we also see that gold hasn’t moved back to it (or any other significant resistance level), so it’s wouldn’t be surprising if Friday’s rally were to be followed by another move higher. From the non-USD perspective, gold has moved back to the support level, but not above it. This makes a subsequent decline quite likely. On the other hand, the candlestick based on the last week price changes is a hammer, which signals a reversal. Overall, the short-term outlook is rather unclear based on the above chart. Silver reversed as well, but overall ended the week more than 2% lower. The strong support levels and our target area were not reached and it doesn’t seem that the decline is over, but a pause is not out of the question, especially that the RSI indicator shows that silver is extremely oversold.

Speaking of the RSI, there was a situation in the past similar to the current one. In April 2013 silver corrected part of its previous decline when the RSI was similarly oversold. Please note that back then the white metal declined once again after a few weeks and silver didn’t rally significantly during the pause. It seems quite likely that we will see something similar also this time. However, the pause may not be that long as we are quite likely in the final part of the entire decline that started in 2011, and the final stages of a given move tend to be rather sharp – especially in the case of silver. How high could gold stocks go before the decline is resumed? It’s a tough call as the market has been very volatile lately, but at this time we wouldn’t rule out a move back to the previously broken support at the 2013 low. The 38.2% Fibonacci retracement based on the recent decline is very close to it, so it seems quite likely that the 185-190 level would stop a rally.

Before summarizing, let’s take a look at one additional chart that suggests that a corrective upswing is to be expected. The gold stocks to gold ratio moved to its 2000 low, which is a major support level. This doesn’t necessarily mean that the final bottom is in, but it does make a corrective upswing more likely.

Our previous comments on the ratio remain up-to-date:

The gold stocks to gold ratio moved to a major support level – the 2000 low. In other words, if someone purchased gold stocks (on average) at the 2000 bottom in order to multiply gold’s gains and someone else just bought gold, they would both have the same amount of money at this time.

As you may recall, the HUI to gold ratio at its 2000 bottom is one of the things that we were expecting to see as the final bottom confirmation. However, at this time there are not enough additional signs to change the overall outlook (based on the silver to gold ratio, for example, we are likely to see further declines).

Can the above chart not mean that the final bottom is in? Yes. There were generally 2 cases, when the ratio dropped sharply and approached important (not as important as this one, but still), long-term support levels: in 2008 and in early 2013. In both cases the previous lows didn’t stop the decline. In 2008 there was a small move below the support level before gold stocks rallied again and in early 2013 there was only a corrective upswing to the 2008 low that verified the breakdown – declines followed.

Summing up, the final bottom is most likely not yet in, but there are some signs that point to further increases in the very short term (several days). Not all signs, however, suggest strength in the short run – there are some that suggest further declines (gold below the 2013 low and non-USD gold below the rising support/resistance line). The situation was not as clear on Friday, as it is now, as we now have the final weekly price changes and weekly closing prices. All in all, the outlook for the next few weeks remains unchanged and bearish (we are likely to see lower gold, silver and mining stock values), but the outlook for the next week or so is a bit unclear. Consequently, it seems that waiting on the sidelines for either a bearish or bullish confirmation is a good idea now. In other words, we think that taking profits off the table is a good idea at this time. The odds favor a move lower, but the risk associated with keeping a short position at this time seems too high.

We opened short positions on Oct. 27 (based on the previous trading day’s closing prices of $1,231.20 in gold, $17.18 in silver, and 184.39 in the HUI Index) and we doubled them on Oct. 30. The profits on this 2-week long short position are sizeable, especially in the case of silver (the white metal declined more than $1.50). Of course, it would be even better to get out at the exact bottom, but that’s simply not something that can be done each and every time (we had exited the previous long position based on the Oct. 21 closing prices, which was the top, though).

As always, we will continue to monitor the situation and report to our subscribers accordingly. We will quite likely open another trading position shortly – stay tuned.

As always, we’ll keep our subscribers updated should our views on the market change. We will continue to send them our Gold & Silver Trading Alerts on each trading day and we will send additional ones whenever appropriate. If you’d like to receive them, please subscribe today.

We were bullish on gold as far medium-term is concerned for the vast majority of the time until April 2013. After that we have generally been expecting lower prices. Are we gold bears? No – we view this decline as lengthy, but temporary. We expect gold to rally in the coming years, but instead of following the buy-and-hold approach, we exit the long-term precious investments at the most unfavorable times and re-enter when things look good again, thus saving a lot of money. Additionally, our Gold & Silver Trading Alerts help you profit from the short-term price swings. We invite you to examine our premium services and encourage you to sign up for our free mailing list today.