Gold and Silver Headed for Breakdown 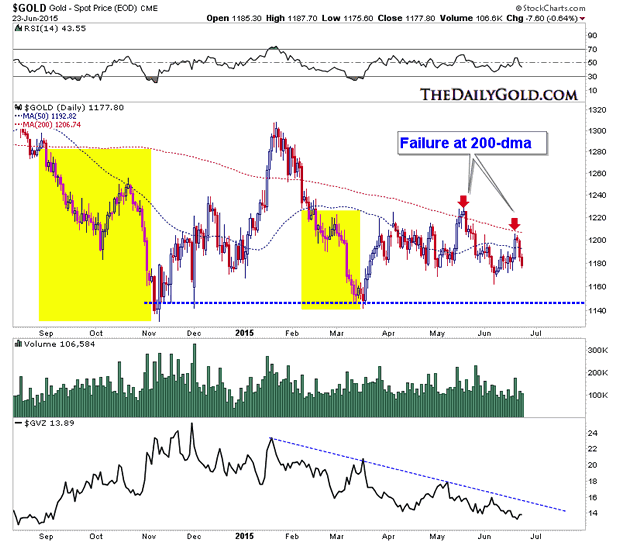 Gold and Silver rebounded following the Fed minutes released last Wednesday. However, one week later both metals are back below pre-Fed levels and moving dangerously close to important support. Silver fell 2% on Tuesday to $15.81/oz, which is only 2.2% above its lowest weekly close of $15.46 which occurred seven months ago. Meanwhile, Gold closed at $1177/oz, which is only $20/oz from its lowest weekly close. In short, precious metals are flashing code red as a breakdown could begin in the next few weeks.

Gold has held in over the past few months but its recent price action suggests trouble is ahead. Take a look at the daily chart below. Gold has failed twice in the past five weeks at its 200-day moving average. First at $1220 and a few days ago at $1207. Gold is now trading below its 50-day and 200-day moving averages and both are sloping down. We highlight the last two times Gold traded below both moving averages. A previous case was in 2015 right before Gold crashed below $1500/oz. I’m hearing from some that sentiment is too negative and the bear has gone on too long for Gold to breakdown. The problem with that is the data argues otherwise.

We plot a weekly line chart of Gold and we include its volatility index ($GVZ) as well as the net speculative position (bottom). Gold’s volatility peaked above 60 during its 2008 bottom and above 30 at its June 2013 low. At present its near multi-year lows. Meanwhile, the net speculative position which fell to 5% and 6% during 2013 was last at 18%. There are still speculators in the market who can sell and drive Gold lower. Staying with sentiment, we recently collected all global put-call data for GLD, SLV, GDX and GDXJ. Its another data point we provide to subscribers. We plot Gold and GLD put-call data (smoothed with a 20-day moving average) in the chart below. No indicator is perfect but lows in Gold have corresponded closely with peaks in the 20-dma. The 20-dma has started to rise but remains quite a distance from those previous peaks. Simply put, the price action in Gold is very bearish and current sentiment (not big picture sentiment) is nowhere near an extreme. This is potentially a very dangerous time for gold and silver bulls. At somepoint (perhaps in a few months), the switch will flip and we could have some epic buying opportunities in the precious metals complex. We are positioned to take advantage of this decline so that we can take advantage of those future opportunities.

Consider learning more about our premium service including our favorite junior miners which we expect to outperform in the second half of 2015.