Gold and Silver: Connecting the Dots 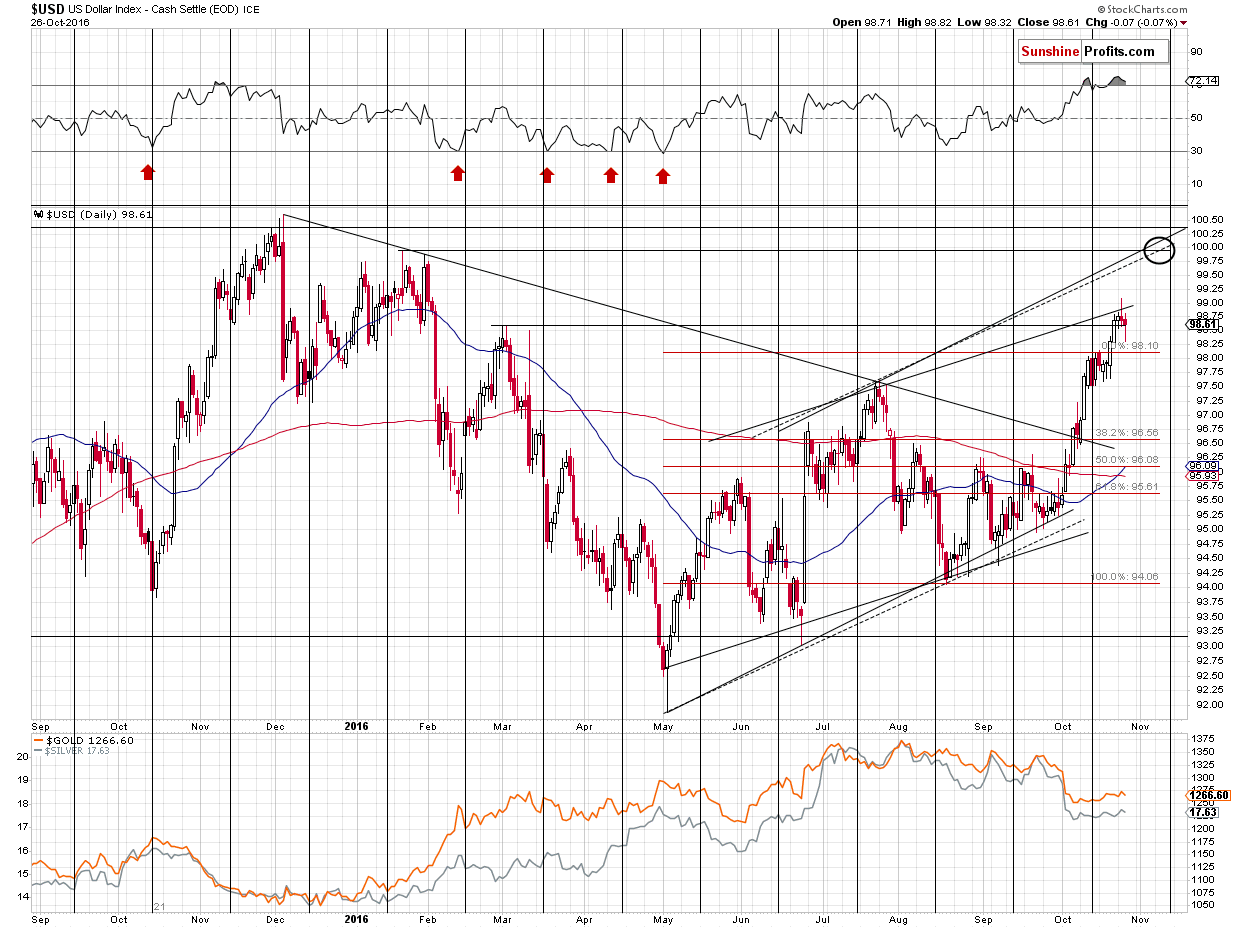 The USD Index confirmed the breakout above March highs, silver outperformed temporarily, miners underperformed and… Despite this bearish combination, precious metals didn’t decline. Why wasn’t that the case? Will they still slide or will they rally from here? Let’s take a closer look at the charts and find out (charts courtesy of http://stockcharts.com). In yesterday’s alert, we wrote the following:

We have indeed seen the confirmation of the breakout – the USD closed above the March highs for the third consecutive day and the implications are bullish for the USD and bearish for precious metals. However, the USD also reversed on an intra-day basis, indicating a good possibility for seeing lower prices later this week. Based on the confirmation of the breakout, the move lower is not likely to be significant though. It will be interesting to see how metals and miners perform in light of a move lower in the USD. So far the USD Index declined a bit (to 98.5) and gold didn’t rally – in fact, it moved about $2 lower.

The implications are bullish for the USD as the next strong resistance is very close to the 100 level. Yesterday’s performance of precious metals was weak – gold, silver and miners declined despite a move lower in the USD in terms of closing prices. What’s even more important, the intra-day decline in the USD didn’t trigger a rally in PMs. This suggests that precious metals and mining stocks may be preparing for a move lower, not higher in the coming days and weeks.

The rally to 100 or so is in tune with the likely medium-term price path based on the analogy to 1997 – 1999. Back in 1999, The USD’s rally didn’t end or pause for longer until the dollar moved above the rising red line. After this breakout, the USD Index rallied some more and then declined, moving back below the line by more or less as much as it had rallied above it earlier. Applying this analogy to the current situation provides us with the 100 level (approximately) as the short-term target and then 97.50 – 98 as the target for the subsequent correction. This provides us with bearish implications for the precious metals sector.

Naturally, there’s much more to the outlook for PMs than just the USD Index.

Looking at gold, we see that the corrective upswing is likely very close to being over.

Why – after all it didn’t move to any significant resistance level so far?

Because price is only one of the 2 key factors that need to be considered – time is the second one. Some say that it’s even more important than price.

We marked the previous short-term corrections after substantial (and a little less than substantial) declines. We marked the first (July – August 2014) rally with a red rectangle and then we copied it to other corrective upswings. The latter don’t fit in terms of size, but we did a pure copy&paste action to emphasize that in terms of time the corrections are truly very similar.

Applying the above to the current situation suggests that the time for a corrective upswing is either up, or almost up.

Let’s move back to the price factor. Why didn’t gold rally higher (on a side note, please note that we were able to make a profitable trade on this rally even though it was small)? Let’s start with discussing why it rallied at all – after all, the medium-term trend remains down.

Gold declined sharply and significantly and it simply had to correct – no market moves in a straight line either up or down (with the final stages of bull markets being an exception), so a corrective upswing was simply likely.

The corrective rally was likely to take gold higher, because the USD Index was likely to correct more significantly. However, instead of declining, the latter corrected its rally by moving sideways around the 97.75 level. The fuel that was likely to be added to the flame never arrived. So, what did gold do? Something natural – it still corrected by rallying, but the size of the move was much smaller than what was likely to be seen (a rally to $1,300 or so). Without the additional fuel, the flame was smaller, but still present.

Yesterday’s price action in gold, silver and USD Index shows that even if the decline in the USD Index does indeed follow, the former may not react to it – the correction that was likely to be seen, was likely already seen (or it’s almost over now).

Consequently, the rally in precious metals is likely very close to being over, even though the strong resistance levels have not been reached yet.

As far as gold stocks and silver stocks are concerned, we wrote the following in yesterday’s alert:

Even though mining stocks moved higher as well, miners closed the session visibly below the previous high. Mining stocks seem to be underperforming gold, which is a bearish sign.

The volume that accompanied yesterday’s move higher was similar to the one that we saw on Monday, when miners declined and it doesn’t have much implications, apart from the fact that it makes the current situation similar to the previous tops in miners when they moved sideways for days (mid-June, early July, mid-August) before moving lower. It seems that it was a good idea to take profits and close the long position earlier this week.

In the previous alert we emphasized that once a bigger daily decline was seen, the rally was likely over:

They all have one important thing in common. Once we saw a single daily decline that was significant (even without discussing detailed numbers, take a look at the chart – at the first sight, you can see that the daily declines in mid-June are significant whereas the decline in the very early June is not), the entire short-term rally was over. The only thing that sometimes followed was a move back to the previous high or a very tiny breakout above it, which was invalidated anyway and followed by a decline. Yesterday, we saw the first significant daily decline since this short-term rally started.

Consequently, we should not expect much higher prices in the coming days – conversely, we should expect another downswing to follow rather sooner than later.

The above remains up-to-date and what we saw yesterday – higher volume during the daily decline – is yet another bearish confirmation.

So, why not open short positions in the precious metals sector right away?

We’ve written many times that silver’s short-term outperformance of gold is a bearish sign and makes a decline in the following days likely. LIKELY, not imminent. There have to be times when the above doesn’t work right away and this also gives us some information – information that appears very important at this time.

What happened, when the mentioned signal was seen and it didn’t work immediately? We saw an additional short-term upswing and then a decline. The size of the subsequent move higher varied, but it was present. So far we only saw a tiny move higher after Monday’s reversal, so it seems that another upswing shouldn’t surprise us – in fact it would likely serve as the perfect bearish confirmation if silver rallies greatly outperforming gold and mining stocks.

This confirmation may arrive very soon, shortly or it may not arrive at all and we’ll keep our eyes open and report to our subscribers accordingly, but for now, it seems that seeing a confirmation is quite probable in the coming hours or days.

Summing up, it seems that we are on a verge of another big decline in the precious metals sector, but we haven’t seen enough bearish confirmations to open a position just yet. It seems that we’ll see them soon, but it seems that it’s too early to open a speculative short position just yet. We can compare the situation to what we saw in crude oil several days ago – the outlook had been unclear for some time, but when we finally saw bearish confirmations, we entered short positions and they are already profitable. We’ll likely see the confirmations for precious metals sooner rather than later.

The above estmations are based on the information that we have available yesterday (Oct. 27, 2016). We will be monitoring the market for opportunities and report to our subscribers accordingly. If you’d like to join them, we invite you to subscribe to our Gold & Silver Trading Alerts today. If you’re not ready to subscribe today, we invite you to sign up to our free gold mailing list – you’ll receive our Gold & Silver Trading Alerts for the first 7 days as a starting bonus.