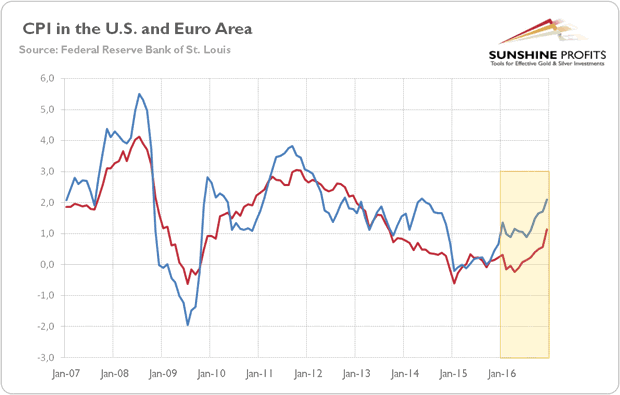 In recent years, deflation was considered one of the biggest threats to the global economy. These fears are vanishing. As deflation becomes the thing of the past (there was even the end of deflation in Japan at the end of 2016), reflation is now attracting the attention of investors. What does it mean? According to the most popular definition, reflation is an increase in economic activity and inflation, usually caused by using inflationary measures to reverse deflationary trends. We simply take reflation to be acceleration in the rate of inflation, i.e. the opposite of disinflation, which is a decrease in the rate of inflation.

Chart 1: The CPI rate year-over-year for the U.S. (blue line) and the euro area (red line) over the last ten years. Inflation expectations also have risen significantly since the summer of 2016, as one can see in the chart below.

What are the drivers of the current reflation? First, global economic growth and industrial production have accelerated. According to the Fulcrum’s latest estimations, the global growth rate jumped to 4.4 percent in December 2016, the fastest pace since April 2011. Similarly, the Goldman Sachs Global Leading Indicator has reached its highest point since December 2010. Even the World Bank said that the growth forecast in 2017 showed “unusually strong pick up in global growth”. And U.S. manufacturing rose in December at its fastest pace in two years, as the chart below shows. Manufacturing also jumped in the U.K. and in the euro area in the fourth quarter of 2016, further improving in China as well.

Second, commodity prices have rebounded. The price of oil has doubled, rising from the bottom $26.11 in February 2016 to $53.75 at the end of year, while copper prices have jumped about 15 percent since November 2016. It may be an important signal, as copper is considered a leading indicator of the global economy.

Chart 4: The monthly average of the price of oil (red line, left axis, WTI, price per barrel) and the price of copper (blue line, right axis, price per ton) over the last five years.

To sum up, reflation is really happening. Economic growth has accelerated, which increased the demand for commodities. The rise in commodity prices has fueled the uptick in the headline inflation data. But the current macroeconomic environment and market sentiment are negative for gold prices. The yellow metal shines during economic slowdowns when investors are in a gloomy mood. This was the case at the beginning of 2016 when China was in the doldrums and markets were concerned about prospects for the global economy. Now, investors have adopted a much more optimistic stance as reflation is unfolding. As real interest rates rose, and risk aversion diminished, gold’s appeal tarnished. Therefore, if the reflation is lasting, the fundamental outlook for gold should be bearish. On the other hand, if it turns out to be another unstable short-term spike in global activity, then gold may rally again. It is difficult to determine with certainty the character of the global uptick in economic activity, but the current indicators are improving in a way not seen since the end of the financial crisis. The Trump rally may be short-lived, but reflation actually started before the U.S. presidential election (see the charts above). It implies that reflation could stay with us, even if the Trumponomics fails, which would be negative news for the gold bulls. They also hope that inflation will boost the price of gold, but the inflationary pressure does not pose a threat for the global economy so far. However, there is, of course, the risk of inflation getting out of control – in that scenario, gold may shine, although investors should remember that it is not a perfect inflation-hedge.

….related: Embry – A Jaw-Dropping 8.6 Million Ounces Of Paper Gold Longs Just Blew Up At The Comex!