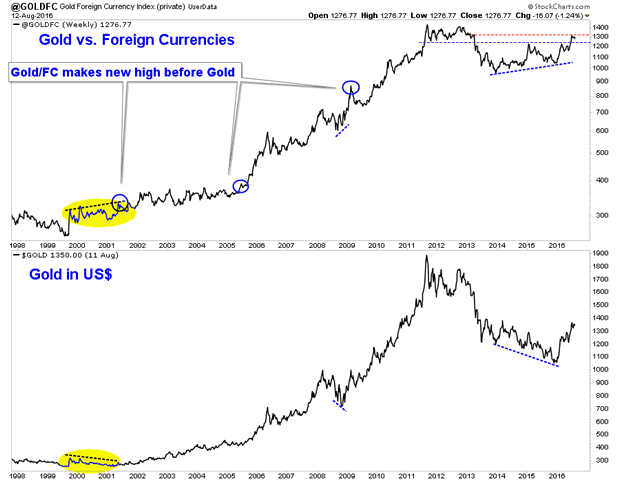 It is the dog days of summer. The metals are trading below their recent highs while the miners continue to be on the cusp of their next leg higher. In any event we remain bullish as we expect the next big move to be higher not lower. One reason, among many is Gold remains strong against foreign currencies and that often is a leading indicator for the sector at large. This is something we track often and we wanted to provide an update during the slowest period of the year.

In the chart below we plot Gold against foreign currencies and Gold in normal, US$ terms. To be clear Gold against foreign currencies (Gold/FC) is Gold against the currency basket that comprises the US$ index. Since the new millennium Gold/FC has been an excellent leading indicator for the sector. Note that Gold/FC has made new highs ahead of Gold and made positive divergences before the three most important lows of the past 16 years (2016, 2008, 2001). In fact, the action from 2014-2015 shows strong similarities to 1999-2000. Moreover, note that at its peak a few weeks ago, Gold/FC was within 8% of its all time high. That is the equivalent of nearly $1750/oz in US$ terms. Tracking Gold’s performance against foreign currencies is essential as we can glean quite a bit more information about what is really going on in the market. Many newsletters purporting to be analysts fear monger over the stability of the US$ as a reason for people to buy Gold. However, note that the US$ index is essentially flat compared to 10 and 20 years ago while Gold denominated in any and every currency is much higher.

In other words, if Gold is going up only because of a falling US$, that is a US$ bear market, not a Gold bull market. A Gold bull market is Gold rising against the majority of currencies. In the same vein, a Gold bear market is Gold falling against the majority of currencies. The charts show that actually ended well before the final low at the end of 2015.

On the mining side, most Gold and Silver comes from outside of the USA and many (but not all) companies are exposed to foreign or local currencies and not the US Dollar. Many companies in Canada and Australia bottomed a full year ahead of the sector because the Gold price in those currencies was very strong (even though Gold in US$ had yet to bottom).

Summing it up, Gold’s strength in foreign currencies confirms its global bull market status and provides a hint that more gains for Gold in US$ terms are likely ahead. We view any weakness in the weeks ahead as a buying opportunity.