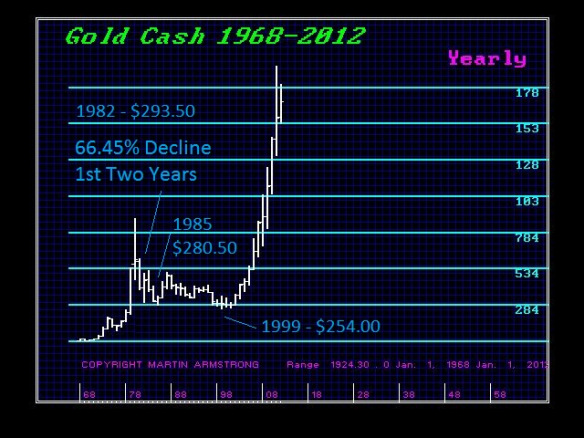 Gold has three very interesting bottoms. The 1999 is the intraday low. 2000 is the lowest yearly closing. Then 2001 produces the lowest quarter closing. This is an interesting set up that is rare to say the least. So effectively, both the 11 and 13 cycles come into play since the low was not a single event. So we got the 13 year since 2012 was the highest closing but we got the intraday in 2011 as 11 up from the lowest closing. Had both the intraday and the close been unified in 1999, then the ideal would have been 2010 with a max of 2012.

Likewise, on the way down we should have had a 19 month correction but the move up to create the highest annual closing in 2012 extended the cycle. Everything happens for a reason and this may prove to be the currency crisis. We still see the phase transition for 2017 time frame and that is normally up to a 2 year event so 2015-2017 does not change anything long-term. The rest will be in the report.