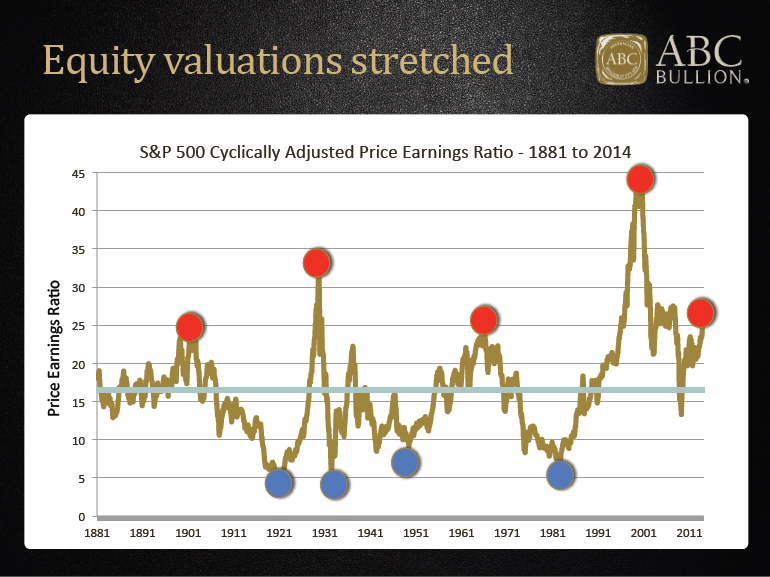 There is a stark difference between the states of the markets for the monetary metals. The number of open futures contracts in gold is low, while in silver it’s high. First, let’s look at the data and then we’ll discuss what it means.

Here is the graph showing the open interest. Now let’s look at the ratio of gold contracts to silver contracts, going back to 2010. There is an unmistakable downward trend since the middle of 2010, almost 4 years ago. Then, there were about five gold contracts for every silver contract. Today, the ratio is down to two.

OK, but what does this mean?

Open interest is a proxy for speculative interest. This is not simply because contracts are created by buying, and destroyed by selling. You can’t assume that contracts are created and destroyed as the price moves. To see why it doesn’t work that way, look at the stock market. The price of a stock can move all over the place, but there need not be any change to the number of shares outstanding.

In the futures market (unlike in the stock market), the number of contracts changes continually. Contracts are added or removed by the computer software that operates the market. When you buy or sell, an existing contract may be transferred from one party to another, or a new one may be created.

It’s complex, but in essence if you want to buy a contract just when else wants to sell, the contract will change hands. It works similarly if you want to sell short, right when someone who is already short wants to buy.

By contrast, if there is no current owner of a contract to sell it to you, when you want to buy, then a new contract must be created. Who sells, who takes the short side of this contract? It can certainly be someone else wants to speculate on a falling price. There are always (well, usually) traders who go short silver. However, I don’t think that this is the full explanation of the data shown in these two graphs.

I favor a theory of arbitrage. If it’s profitable to buy metal in the spot market and sell a future against it, then someone will take this trade. This short seller is a source of unlimited contract creation, if it’s profitable.

It’s called carrying the metal. If you carry, then you make a small spread—without price risk. This spread is called the basis—the price of the future minus the price of spot metal. Or, more precisely, basis = Future(bid) – Spot(ask), because you must pay the ask when you buy the metal, and accept the bid when you sell the future.

Let’s take a look at the gold basis and silver basis for the Dec 2014 contract, from early fall through today.

The profit to carry gold has been steadily falling. It began at 0.35% (annualized), when the duration was 15 months. It was hardly the stuff of legends—or getting rich quick—even last October. That meager margin has been steadily eroding, and is now 0.1% for 8 months. Suffice to say that gold carry has offered little or no opportunity to make money. Therefore the gold carry trade has not been a big source of contract creation.

The profit to carry silver, by contrast, has not much changed. It’s still around 0.5% (annualized) or more. This is far more attractive than gold, and probably more attractive than other opportunities in our zero-interest world. Therefore, the silver carry trade has created many silver contracts.

What drives the basis spread? Speculators, when they buy a future, drive up its price just a little bit. This is the inducement to the arbitrager to buy a bar of metal and sell the future to the speculator. The arbitrager carries metal, to provide a service to the speculator. He is the one who “converts” (I use this term carefully, in the full context defined here) metal to paper, a bar to a contract. He’s ready, willing, and able to deliver that bar should the speculator have the cash to demand delivery.

The long and short of it (to make a tired cliché into a dreadful pun) is that in gold, there just is not much speculation, and therefore no profit to be made carrying the metal, and therefore when a buyer occasionally comes to the market his demand can be satisfied by a previous buyer who is selling a contract.

However, in silver buyers are running at a much more torrid pace. They’re too numerous to be satisfied by the occasional seller. They bid up the price of the futures, which makes it attractive for arbitragers to carry silver and sell them the contracts they desire.

Incredible as it may seem, at the low price of $20, speculation in silver is rampant. Market participants are trying to front-run a big price move. Due to rumors or gut feel or for whatever reason, they are expecting not only that silver will outperform gold, but that the silver price will rocket to a much higher price. Their frenetic buying of futures has pulled a lot of silver into carry trades.

Maybe hoarders will all of a sudden increase their appetite for silver metal that they will take off the market and bury. If so, the silver futures speculators will be proven right, and they will make a lot of dollars (money is a different story entirely).

I would not recommend that anyone bet his hard-earned money on a maybe. The data—both open interest and basis—show that the buying in the silver market is primarily speculators. They cannot sustain a higher price forever. They are merely trying to front run a higher price driven by hoarders. If hoarders don’t come in, the speculators will be forced to capitulate. When that happens, watch out below.

The neutral price of silver is in the $16’s today. If the price overshoots as far to the downside as it is now stretched to the upside, we could see silver with a 12 handle.