Posted by Prezemyslaw Radomski via The Daily Gold 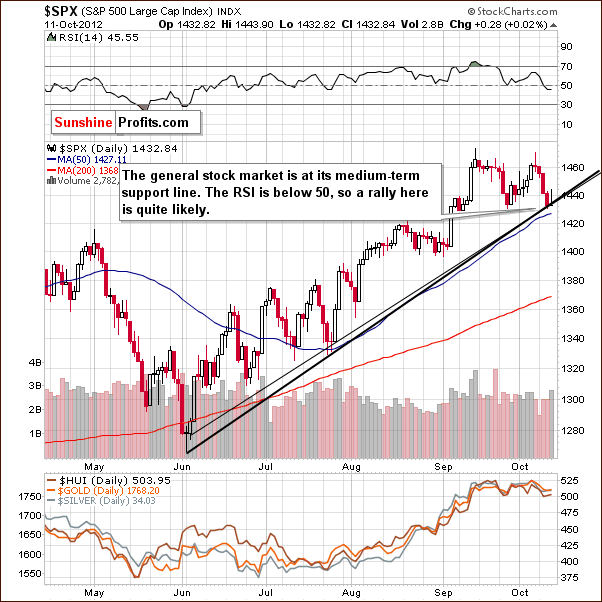 Despite a lukewarm, lackluster first half of the year, Gold has so far risen by 13 percent in 2012, nothing to sneeze at. The price of gold rose by about $215 in 2012, with most of the gains, $165 worth, having materialized in the last two months. This was after the U.S. Federal Reserve announced its plan to resume buying bonds to prop up the economy. The underlying bullish case for gold remains intact, given the prospect of indefinite loose monetary policy. Central banks have been supporting gold this year and it’s no wonder. They are well aware of the soon-to-be-enforced reserve requirements that call for greater holdings in gold. There is also demand from key consumers such as China and India.

Gold mining is also experiencing strikes. Members of South Africa’s biggest union this week rejected a proposal by the nation’s largest gold companies to raise wages and end strikes that have crippled the industry. This is affecting about 41 percent of South Africa’s gold output.

While some mining companies see decreases in their outputs due to strikes, their direct competitors may benefit from this situation as investors rebalance their mining stock portfolios and substitute the less profitable companies with more successful ones. If the latter are included in popular indices (HUI, XAU), the latter are likely to show strength, especially given the open-ended QE.

The Quantitative Easing program will likely help to boost prices of virtually all stocks (and make the fall of the worst performing ones milder). Let’s take a look if that was really the case recently (charts courtesy by http://stockcharts.com.) Stocks have temporarily moved below the support lines that you can see on the above chart, but they have quickly moved higher and the situation looks bullish once again. The short-term trend simply remains up.

Let’s now have a look at the intermarket correlations to see how the situation on the general stock market could influence precious metals and mining stocks. The Correlation Matrix is a tool which we have developed to analyze the impact of the currency markets and the general stock market upon the precious metals sector. Once again we see the classic correlations this week as the USD Index is negatively correlated with the precious metals and the metals are positively correlated with the general stock market. The highest correlation in the past 30 days has been between the miners and stocks.

Please note that last week the miners did not decline as much as stocks did. While the correlation coefficient for the 30 trading days was very big, the one based on the past 10 trading days was only 0.6. Last week, mining stocks were simply not responding to the negative signals from the general stock market, which is unusual since they are normally highly correlated with stocks. With stocks now moving higher, the picture is quite positive for the miners in the short term – at least based on the general stock market and miners’ correlation with it.

Are the miners themselves holding well? On the above medium-term HUI Index chart (proxy for gold stocks), we see that the mining stocks didn’t decline below 500 last week and they, as surprising as it may seem, are above 500 also today even though gold and silver declined significantly on Monday.

Does it mean that the correction in the precious metals sector is over? Not necessarily – there are factors that need to be considered in addition to examining the picture in the HUI Index and S&P 500 to say that, however, it does seem very likely that the mining stocks will be a very good investment once the correction is indeed over. Assets that hold well during a correction are often the same assets that outperform when the correction ends and markets start to rally.

Summing up, the short-term outlook for the general stock market is bullish as stock prices moved back above the support line this week and the implications for mining stocks are bullish. The correction in the precious metals market may not be over at this point, but when it is over, miners might finally outperform the underlying metals once again.

In order to make sure that you won’t miss any of our free essays, we strongly suggest that you sign up for our gold & silver investment mailing list. Sign up today and you’ll also receive 7 days of access to our premium updates, market alerts, premium charts and tools. You’ll also receive 12 best practice e-mails as a starting bonus.

Article Posted on October 16th by:

Jordan Roy-Byrne, CMT (Trendsman) is a Chartered Market Technician, a member of the Market Technicians Association and from 2010-2011 an official contributor to the CME Group, the largest futures exchange in the world. He is the publisher and editor of TheDailyGold Premium, a publication which emphaszies market timing and stock selection for the sophisiticated investor.

Since January 2010, The Daily Gold Premium Model Portfolio is up 129% compared to GDX (+15%) and GDXJ (+6%).  Jordan’s work has been featured in CNBC, Barrons, Financial Times Alphaville, Kitco and Yahoo Finance. He is quoted regularly in Barrons. Jordan was a speaker at PDAC 2012, the largest mining conference in the world and is a speaker for Cambridge House and Hard Assets conferences. Jordan earned a degree in General Studies with a concentration in International Economic Development. Jordan also lived and worked in Southeast Asia for 3 years in order to study economic development from an emerging market perspective. In his spare time he enjoys spending time with Mrs. Trendsman.