On The Brink of an Enormous Change – Time to Move Now 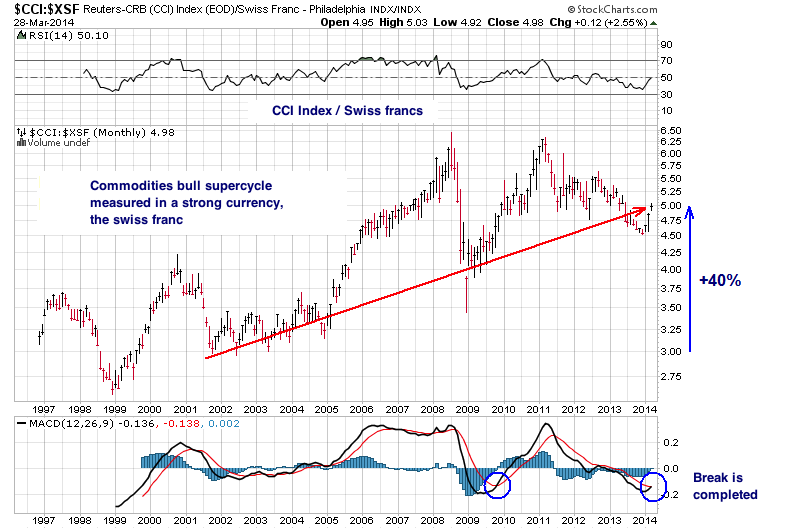 During this supercycle, a large part of the rise in prices has to be attributed to the loss of purchasing power of the dollar. To the point, if we measure this bull market in swiss francs, the general rise in prices since 2001 doesn’t exceed 40%, whereas, in dollar terms, prices have already gone up by 200%! Gold, as an excellent safe haven against the fall of the dollar (and of the other currencies, but mainly the dollar), will perform best (along with silver) for the total duration of this supercycle.

A commodities supercycle can easily last between 15 and 20 years. If we take into account the pressures exerted on commodities by countries such as China and India, world population growth, peak production already reached in several commodities and climactic changes affecting soft commodities production, this supercycle is far from being done!

One thing is certain : The commodities index will not get back to its bull market without gold and silver! By comparing gold with commodities, we can get the monetary risk premium associated with gold with a gold/CCI ratio, which gives us gold’s relative strength versus all other commodities.

We clearly see that gold started its bull market in all currencies only when it started to emancipate itself from the whole commodities sector, around the Fall of 2005. Up to that time, the monetary risk premium was zero, and the bull market in gold was only seen in dollar terms. The current low-risk premium environment is about to end, because the current actions by the Fed will be unkind to the real estate market, the bond market (less and less buyers of U.S. debt = long-term interest rates rising), and to the stock market, in a bubble situation.

It is as if the Fed were walking on very old boxes full of explosives on which the only remaining solid plank was the faith in the system, e.g. this on-going bluff about an economic recovery! The Fed doesn’t have a choice anymore… it is only recharging its rifle to keep a semblance of integrity, but all it can do to fight against the deflationary pressures of this long cycle (Kondratieff’s winter) is to print, print, and print some more.

The next crisis, in all probability, will be a dollar crisis, and it will contaminate the whole of the monetary system, which is already in a competitive devaluation contest. The need for physical gold as a debt extinguisher and a guarantee of stability for currencies will become larger and larger and will most probably lead to the final phase of this supercycle. $1,300 gold will be seen as an aberration in a few years! Regarding this current test of the 200-day moving average for gold, the breakdown is only 1%, so it is within the margin for tolerance, if we compare today’s golden cross with the one we had in the bull market of 2001, where the breakdown had reached 1.3% (read my preceding analysis). If this test fails, we could still be trading without any clear direction in a sideways range between $1,250 and $1,425 for a few more months, but this will only make the next price retracement move and the monetary risk premium more violent!

Léonard Santoni is an independent contributor who often publishes for a Swiss Dealer GoldBroker.com. Léonard has been analysing the gold market since 2003. In 2007, he wrote a book, 2008-2015: Why Gold Will Outperform Stocks and Bonds”