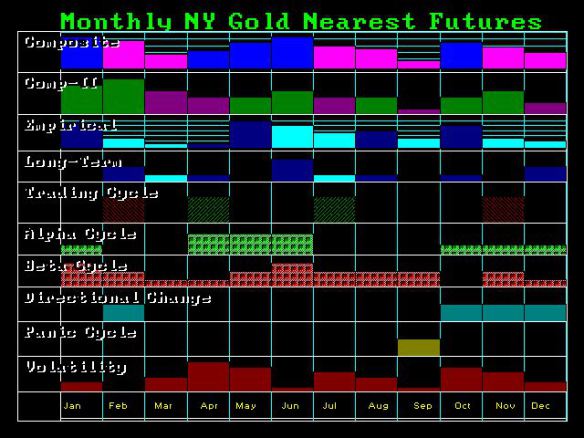 We have a very serious problem. In gold, everyone is loaded to the gills expecting hyperinflation that will never materialize and governments are getting outright nasty. We have THREE Monthly Bearish Reversals that have now lined up in gold at 15470, 15413, and 15323. We have a huge gap from there to 11589 and this is not real good. Gold closed 2012 higher than it did for 2011 on the 13th year up. That is by no means good at all. If these reversals are elected, look out below. We may have to clean house before gold can resume the uptrend. A snapshoot of the array for gold in 2013 came out as expected at the Berlin Conference. The Panic Cycle is September but look at the directional changes thereafter – every month. This is by no means going to be a walk in the park. The German elections are September 2013. Merkel is seen as the last hope for Europe even though she is really doing nothing of note but changing with the wind.

We will be preparing a new special metals report. It is obviously going to be needed right now. Will advise when it is ready. Martin Armstrong was born in New Jersey the son of a lawyer and Lt. Col underGeneral Patton in World War II. Martin was encouraged by his father to get involved in computers during the mid-1960s. He completed engineering both in hardware and software but after being offered positions by a government contractor RCA in Thule Greenland, Guam, or Vietnam, he decided to go back to gold business that he had first began working while in High School to earn money for a family trip to Europe in 1964 for the summer. He continued to work on weekends through high school finding the real world exciting for this was the beginning of the collapse of the gold standard. Silver was removed from the coinage in 1965 and by 1968 gold began trading in bullion form in London. The gold standard collapse entirely in the summer of 1971 and gold became legal to trade in America during 1975 in bullion form. Previously, the market for gold had always been in coin form as long as they were dated prior to 1948.

….read and view much much more HERE