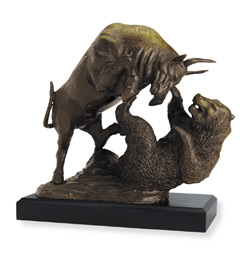 89 Yr. old Legend Russell on how bull markets typically end, how the Gold Market hasn’t in his opinion fit the scenario and is more likely “seeing the wind-up of the gold bull market” that will end with “an exciting and frantic “all-in” entrance of the crowd”

“Everybody knows that the US has an almost unsolvable problem with debt.  Let’s call it a predicament, since there is no way of solving the debt problem in an acceptable way (I mean in a politically acceptable way).  Of course we could declare sovereign bankruptcy — or we could turn to hyperinflation and literally inflate our way out of the debt-trap.  But neither would be acceptable or politically possible.

But before the predicted disaster, you can be certain that the coming trouble will be sensed and registered in the price of something.  It will show in the price of stocks or gold or bonds or the dollar.  In other words, it will show somewhere in price.

What about the bond market — isn’t the bond market now saying, “trouble ahead?”  In my opinion, not yet.  True, bonds have taken a beating in recent months, but I don’t call the decline in bonds, so far, a red-flag prediction of disaster … And the stock market continues to rise, probably based on the current ocean of liquidity.

How about gold?  Ah, gold may be about to raise the red alarm-flag.  But not quite yet.  As a personal opinion, I believe gold has now put in a major bottom.  Wait — what about price?  Ah, there you’ve got me.  Even if a bottom has been put in, we have not yet seen the “meat.”  The price of gold has not yet started to boom.  It’s one thing to say that you believe “the bottom is in,” but it’s another thing to see the item surge off its low.

I’m not completely satisfied with the DIAs:  The P&F chart suggests that we could see a good upside run from here, but I don’t think it would be a long-lasting, extended bull move.  I’m still worried about a potential disaster somewhere in our future.  You see, I’m afraid that the Greenspan/Bernanke Federal Reserve has set up America for a future disaster.

Bull markets don’t usually end with what looks like a correction — bull markets usually end with an exciting and frantic “all-in” entrance of the crowd.  We have not seen that, so far.  I think it’s coming.  Gold has been bad-mouthed so thoroughly that I think gold could rally back halfway to its old high (above 1900) before the public and the pros would even look at it.

I’m wondering whether this could be the start of the final blow-off phase of the bull market in gold.  The sentiment is right.  Everybody remains dead-bearish on gold and nobody expects a blow-off to new highs and beyond.

Owners of Gold contracts on the Comex have been taking delivery of the actual gold when their contracts expire.  My thinking is that foreign nations have been the ones taking this gold (China, Russia?).  While Americans have been fooling around with “cheap paper gold,” foreigners have been helping themselves to cheap actual bullion.  Sad but true.”

To subscribe to Richard Russell’s Dow Theory Letters CLICK HERE. Ed Note: I just spoke with Richard’s head office and I am told that Richard still wakes up every morning excited to see what is going on in the markets. That is why his production of writing for his customers is so prolific. Not only does he mail out his extensive Newsletter every 3 weeks, but he sends out a comment every day with his thoughts on the markets action that day. All this for .82 cents a day, or only $300 per year!