Global Supply Chain: ‘Don’t ask ‘what is being counterfeited, but what isn’t!’ 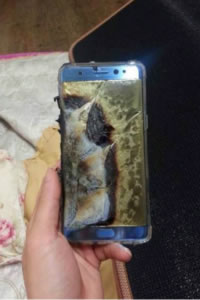 The extended period of what can only be termed as Monetary Malpractice, has resulted in global over-supply and an unprecedented production glut, rather than the increased demand sought for economic stimulus by policy planners. What comes with a supply glut is a lack of pricing power, extreme competition and unfortunately the human trait to “cheat” when under mounting pressure. In our just concluded research on the the seriousness of the rate of product quality deterioration in the global supply chain due the central bankers policies of “cheap money”, Charles Hugh Smith and I laid out our finding earlier this week in a 35 minute video (see: Abstract) entitled: Bankers Crippling the Global Supply Chain. We conclude that pressures to cheat are now not just the purview of Wells Fargo. Additionally, the Samsung’s Galaxy Note 7 battery problem is only the tip of the iceberg on quality concerns which is likely to soon emerge.

Bloomberg investigative reporter Niclas Rolander in The Dangerous Game Behind Fake Ball Bearings has also discovered what we found, but it appears even worse and more broad based than we initially suspected!

Nairobi’s Kirinyaga Road is the kind of dusty, run-down thoroughfare that sits on the fringes of most African city centers: Cars and motorbikes weave their way through throngs of shoppers browsing storefronts crammed with cheap electronics, housewares, and clothing.

One Tuesday morning last April, a blonde woman from Sweden stood out from the crowd, leading nine Kenyan officers to a storefront she believed was selling counterfeit goods. But they weren’t after knock-off handbags, watches or sunglasses. The shop specialized in a far less sexy — and ultimately more dangerous — fake product: ball bearings. Overseeing the raid was Tina Aastroem, head of brand protection for SKF AB, a Swedish maker of bearings. Aastroem had cased the store six months earlier, concluding that many SKF products there, as well as those of rival manufacturers FAG and Timken Co., were fake. In the raid, her team spent hours sorting through boxes stacked from floor to ceiling–fueled by chicken ordered from the local KFC–and found $100,000 of counterfeit bearings for cars and other vehicles.

“It was about three tons that had to be inspected, lifted, packed and carried,” Aastroem said. “You don’t have to go to the gym to work out if you do this kind of work.”

Everything from shoe polish to medication to car parts is pirated. Estimates of the scale of the problem range from $461 billion — 2.5 percent of global trade — the Organization for Economic Co-Operation and Development says, to some $1.8 trillion, according to calculations last year by the International Chamber of Commerce. And while makers of luxury goods — among the most prominent counterfeited products — lose profit from the trade, there’s little risk to consumers. In the case of more mundane stuff like bearings, forgeries can be dangerous as well as costly.

“Many people believe piracy is limited to handbags and other similar products, but the more serious issue is industrial companies,” said Ann-Charlotte Soederlund, co-founder of the Global Anti-Counterfeiting Network, an umbrella organization of fake-fighters around the world. “The effects can be immensely larger than the consequence of a fake handbag.”

Finnish Formula 1 driver Mika Haakkinen pulled out of the 1998 San Marino Grand Prix when his gearbox failed due to fake bearings. Knock-off building materials have been shown to catch fire. Counterfeit electronics have caused military equipment to fail. And SKF says a sham bearing in a swimming pool pump sparked a fire that burnt a house to the ground.

“The question is not what is being counterfeited but what isn’t,” said Karl Lallerstedt, program director of Global Initiative Against Transnational Organized Crime, a network of law enforcement agencies.

Sandvik AB, a Swedish manufacturer of mining equipment and steel products, hires contractors to scour websites and orders suspicious products to test them in Sweden. Schneider Electric SE, a producer of power equipment, has developedbar codes and labels that can be checked with ultraviolet light to detect counterfeits. Vallourec SA, a French maker of pipes for the oil and gas industry, is stepping up its fight against fakes as it has detected forged certificates that are meant to prove the authenticity of its products.

“The number of reported falsified certificates has increased in recent years,” said Anais Eiden, Vallourec’s senior legal manager for intellectual property. “Counterfeiting is a risk and we act to mitigate it.”

Bearings from SKF, the world’s No.1 manufacturer of the steel balls, are used in everything from dishwashers to nuclear power plants to make parts spin more freely and reduce friction. Forgeries of its products typically originate in China, often from factories where legitimate competitors make their products, Aastroem said.

Workshops there buy unmarked bearings, stamp them with the SKF brand and put them in packaging designed to look genuine, the company says. From China, the bearings are shipped worldwide to customers who often believe they are buying legitimate parts, frequently at distributors like the one in Nairobi.

Aastroem runs a team of 10 full-time and 50 part-time employees who look for fakes at hardware stores and spare parts shops across the globe. That approach is unusual among big industrial companies, which more often hire local contractors to investigate and coordinate with police.

She says she goes on about 10 raids a year, and that she often will poke around shops while traveling to look for knock-off products. The Nairobi raid was spurred after she visited Kenya for a Swedish Embassy event and took some time off to check the local market.

“I stand in front of a shop smiling like I’m posing for a tourist photo, but what I actually want is photos of the shop,” Aastroem said.

But even Aastroem sometimes relies on customers to identify knock-offs. One client in Australia contacted SKF just before installing a large bearing in a power plant that didn’t fit quite right. It turned out to be counterfeit.

“If it had failed, a third of the state of Victoria would have suffered an outage,” Aastroem said.

In the Nairobi raid, one of 130 SKF has participated in this year, about 95 percent of the SKF bearings Aastroem found were knock-offs. When the shop owner arrived to see what the fuss was about, he tried to bolt but was soon caught and arrested, Aastroem said. He paid a fine and the fake bearings were destroyed. Participating in such raids helps Aastroem figure out how vendors sell their wares and the kinds of customers who buy — knowledge that helps the company to track down fakes and provide better information to clients about potential pitfalls of using knock-off goods.

“If you’re not there you don’t understand the business model,” she said. SKF’s hands-on approach “is a significant investment, but it does pay off.”

Learn how these problems actually stem from the unintended consequences of current Central Bank monetary policy and what is termed as Financial Repression.