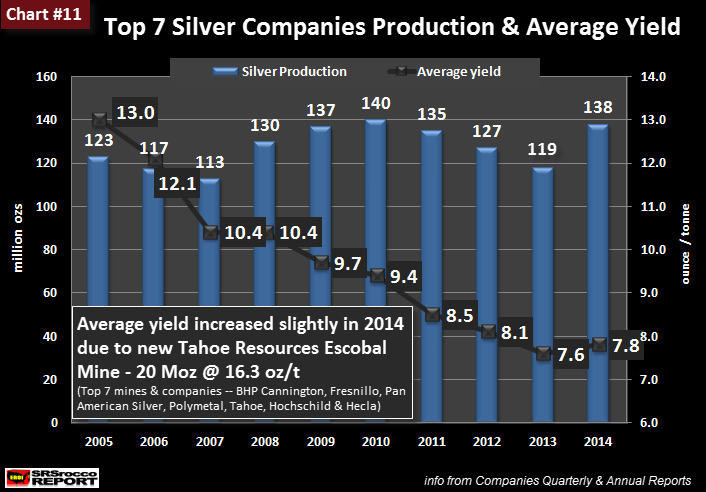 After the Primary Silver Mining Industry enjoyed a brief increase in productivity over the past two years, it fell to the lowest ever in 2016.  The reason the primary silver mining industry’saverage yield increased in 2014 was due to the addition of Tahoe Resources high-grade Escobal Silver Mine. Now, what is very interesting about adding Tahoe’s Escobal super high-grade mine to the group, it didn’t move the average yield up that much…. only 0.2 0z/t to 7.8 oz/t.

I didn’t update this chart for 2015.  However, I have now added the data for 2015 and 2016.  As we can see in the updated chart below, the group’s silver production has increased over the past two years from 138 Moz in 2014 to 158 Moz last year.  The majority of this increase was due to the ramp up of Fresnillo LLC’s Saucito Mine:

The falling average yield in the silver mining industry seems to be overlooked by the majority of analysts.  As we can see in the chart above, the primary silver miner’s average yield has fallen from 13 oz/t in 2005 to 7.4 oz/t in 2016.  This is a 43% decline in just 12 years.