The Irresistible Opportunity with Interest Rates Near Zero 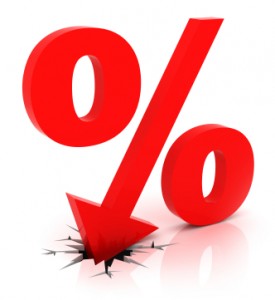 Considering that interest rates have never been this low in our lifetime it’s hard to imagine that the biggest credit market risk we face is that rates keep falling…rather than going back up.

German and Swiss two year government bonds are currently around 40 basis points negative to par…that is, you give your money to the German or Swiss government and two years later they give it back to you  minus a safekeeping charge. Even the French government was able to raise 6 month money this week at negative yields. We can understand that German and Swiss rates are low (perhaps we can even understand that they are negative) because of the flood of cash fleeing peripheral Euro countries…but France borrowing at negative rates…that’s hard to understand!

Once markets cross the Rubicon to negative interest rates then there is no way of knowing how low rates might go. (Our friend Dennis Gartman gives us good advice on this matter: “Never buy a market that is going down…you have do idea how far down…down is!”)

The US Treasury sold 10 year bonds this week at the lowest auction yield ever – 1.459% – in the face of very strong demand for the issue.

The Eurodollar futures market is current pricing short term rates over the next year at around 40 basis points…about the same record low levels reached last August after the DJI fell 2000 points in 3 weeks and the VIX (the fear index) jumped to its highest level since early 2009.

My question is: if the Germans and the Swiss and even the French can borrow money at negative interest rates when will the American and Canadian governments be able to do the same? What market conditions would likely have to exist for our interest rates to go negative? A serious recession? A financial meltdown in …that extends to our markets? A serious slowdown in? All of these things at once?

For the past few years I have continually made the point that we are (in Gary Shilling’s words) in an Age of Deflation…that the simulative efforts of governments and central banks to maintain “growth” were only a rearguard action in the face of massive private sector deleveraging…that deleveraging is a consequence of “Way more money has been borrowed than will ever be paid back!”

The city of  followed  this week and filed for bankruptcy. The reason: current revenues don’t cover current expenses and accumulated debts and (pension) obligations. ( also recently flied for bankruptcy when they lost a lawsuit.) How many more local governments will come out of the closet now that the bankruptcy taboo has been broken? Meredith Whitney may yet be vindicated on her prediction that there will be 50 – 100 “sizeable” municipal bond defaults.

This week the Spanish government, in an attempt to meet Austerity demands from their lenders, proposed plans to increase the VAT from 18% to 21%, cut salaries for gov’t employees, and cut UE benefits (in a country with official UE around 25%.) Riots followed.

President Obama, in an election year cri de coeur, has declared that taxing the rich is the way to go…and the way to distinguish himself as the right political choice over filthy rich Romney (Obama’s personal net worth is publicly estimated to be ~$10.5 million.)

This week the Bank of England laid out a program of “rewards” for banks that increase lending to businesses and individuals.

If low interest rates have been a problem for struggling pension funds and life insurance companies imagine what will happen to them if interest rates go negative.

Betting against falling interest rates…and expecting that they have nowhere to go but up…because we think they are SO LOW relative to our lifetime experience…may be a bad bet!

For my own accounts: My long term savings are very liquid and very conservative…largely in cash. I move in and out of the markets with my short term trading accounts (rarely using much leverage) as I try to catch price swings of a few days to a few months. My net worth is ~95% cash with ~25% of that in USD, ~75% in CAD.